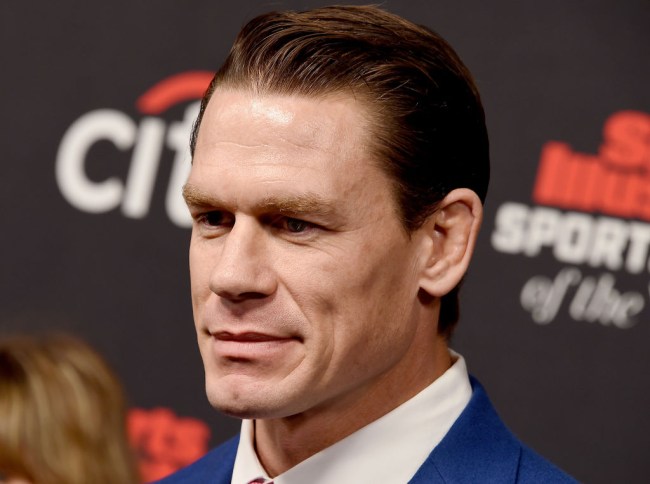 A couple months ago at WWE’s Super Show-Down in Melbourne, John Cena debuted a haircut that could only be perceived as a cry for help. The 16-time WWE World Champion ditched his signature high-and-tight military cut to rock a haircut that can best be described as the manifestation of a mid-life crisis. Mind you, this wasn’t too long after Cena’s split with Nikki Bella. Never trust the mind of a man with a broken heart.

Good to see John Cena and his totally not a midlife crisis hair at Wwe super showdown #wwessd pic.twitter.com/thBSHglCJl

Cena appeared on Jimmy Kimmel is the lead-up to his return to WWE’s circuit starting with the December 26 event at Madison Square Garden, and Kimmel asked him if he’s going to cut that thing on his head.

“No … Because the thing I like about the WWE is they’re very vocal, and very excited. So when I go to Madison Square Garden looking like an accountant, not so much a thin one, they’re going to raise hell. So it’s going to be great, I just want to see what happens. … I don’t know what they’re going to do.”

Cena continued by explaining that he relishes in fans’ confusion.

“So here’s the deal, I’ve been playing a character in WWE for 15 years now, and I’ve looked the exact same. Then I left to go to China for about 6 months and I came back with this, and literally it has caused a title wave of emotional upheaval. I’ve literally ruined people’s childhoods. I know you do ‘Mean Tweets’ and every day it’s just a barrage of ‘change back, you look ridiculous, you ruined my life!’ I’m just trying to figure my life out, I don’t know what the hell’s going on.”

John, I support you. But please stop trying to sell me a used car. I can’t even afford a subway pass.