John Krasinki ‘Threatens’ Hugh Jackman For Getting Cozy With His Wife, Ryan Reynolds Jumps In To Troll Everyone 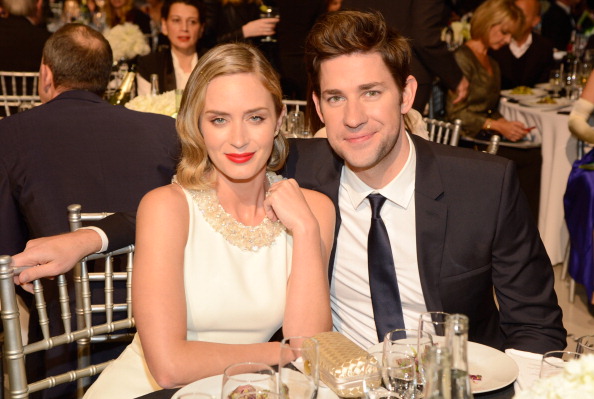 Ryan Reynolds and Hugh Jackman have been trolling each other for a while now (as seen HERE, HERE, HERE, HERE, and HERE). However, player three has entered the troll game and his name is John Krasinski.

Hugh Jackman posted a photo of himself getting close to Emily Blunt during Variety’s Actors on Actors event, where actors interview each other.

Had the pleasure of chatting with the amazing EMILY BLUNT today. @Variety #actorsonactors @TheFrontRunner @MaryPoppins pic.twitter.com/djf832QpdY

Emily Blunt’s husband, John Krasinski, wasn’t too thrilled about the “Actors on Actors” action and took to Twitter to voice his displeasure about how cozy Wolverine was getting with his wife. “Eeeeeeasy Hugh… not sure this is what @Variety meant with #ActorsonActors….Don’t make me think I can hurt you,” Krasinski wrote in a tweet to the Australian actor.

Eeeeeeasy Hugh… not sure this is what @Variety meant with #ActorsonActors….Don’t make me think I can hurt you. pic.twitter.com/cL8PUWhHqq

Jim is not playing around.

Krasinski got ripped for Jack Ryan (See his workout HERE) and is no longer a paper pusher at Dunder Mifflin. Jackman, watch your back.

Of course Ryan Reynolds could not help himself and had to dump a drum of jet fuel onto the fire. “This is a call to action,” Reynolds wrote. “This man must be stopped.”

This is a call to action. This man must be stopped.

When are these three catty celebrities teaming up together in a comedy to troll and roast each other in a Hollywood movie?

Reynolds is currently promoting Once Upon A Deadpool, the PG-13 edit of Deadpool 2 that stars Fred Savage and proceeds of tickets will be used to fight cancer (You can learn more and watch the trailer HERE).

Now let’s just hope that The Office reboot that almost everybody wants (except for Steve Carell) comes to fruition.

Here are some of the other times Jackman and Reynolds brilliantly trolled one another on social media.

When you’re trying to record a heartfelt birthday message … but are interrupted by the least greatest showman. @vancityreynolds

I gave this 3 months. Tops. I was wrong. https://t.co/gxXSdACQ1X

Seriously mate. You've got to stop following me. SECURITY!!!! @vancityreynolds

@VanCityReynolds asked me to post this 100% real video by him on being honored with a star on Hollywood's Walk of Fame today.

Pretty sure those are protesters. https://t.co/URNGDCg0cO

The Wizard of Oz: "As for you, my galvanized friend, you want a heart. You don't know how lucky you are not to have one. Hearts will never be practical until they can be made unbreakable." The Tin Woodsman: "But I still want one."

This man is a monster. He’s not even from Australia. He’s from Milwaukee. https://t.co/CxHceP4d9L