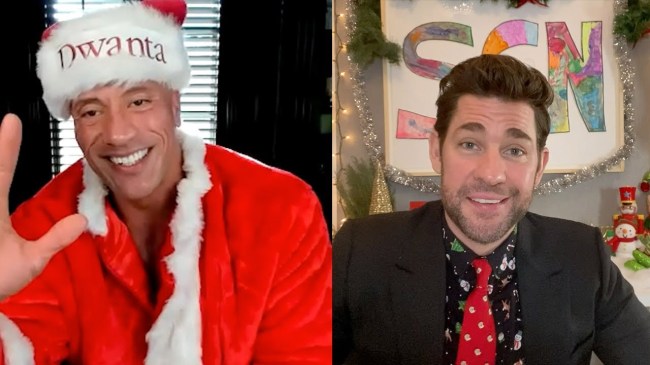 In the first YouTube video since he sold the series to CBS back in May, John Krasinski returns with a new edition of Some Good News.

In this very special holiday episode of Some Good News, Krasinski welcomes Dwayne “The Rock” Johnson, AKA Dwanta Claus, as well as guest weatherman George Clooney.

During Krasinski’s chat with The Rock, Krasinski did indeed share some good news, revealing that sponsor FedEx was donating $5 million to the Toys for Tots holiday drive.

Krasinski and The Rock also welcomed a man named Jay Abel. Abel lost his wife three years ago and earlier this month he tweeted at Johnson asking him if he could help him raise some money to buy his kids some Christmas presents.

@TheRock Hi Rock! I'm like your biggest fan! So I could use your help please. I'm trying to raise some money to be able to provide my children with a Christmas this year. If it's not to much to ask, Would you please consider retweeting this please. Thank Uhttps://t.co/X84mxELnQ1

Abel, an avid comic collector, was attempting to sell some of his collection to buy his kids’ gifts, but The Rock, after seeing the tweet, wasn’t having it.

“I’m just trying to be what I expect of a father. I’m not doing nothing special. I’m a collector, they’re my favorite stuff, but my children are more important than me,” said Abel.

“Take all of your stuff off of eBay because Dwanta Claus is going to take care of all of that stuff, man,” said Johnson, who also promised to buy all the items on Jay’s kids’ wish list.

DJ also told Abel he was going to bring his family out to DC Universe in California when the pandemic eases and will be presenting him with a leather-bound, signed Black Adam script.

While this is the first episode of Some Good News to appear on YouTube since the sale to CBS, it has still been active on social media, spreading good cheer.

As Krasinski told his former co-star Rainn Wilson on his podcast back in May, “We have a lot of really fun stuff planned and I can’t wait to dig in. I’m going to be a part of it whenever I can, and I’m going to host a couple episodes and bring on a different community of people. We’re really, really excited about it.”

Hopefully some of that “really fun stuff” starts happening in 2021. Lord knows we could all use more of it.

Keep up the Good News! 🎅🏼 https://t.co/MeLeveokTh