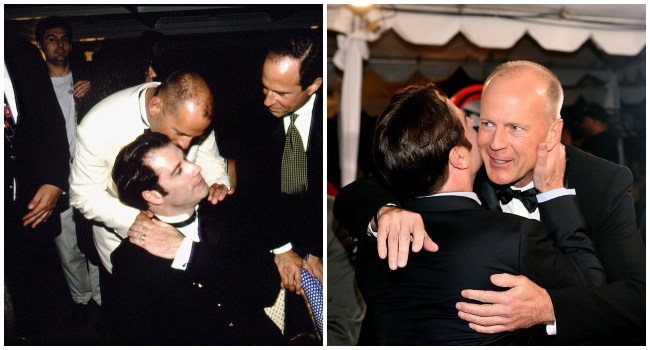 Following the announcement that 67-year-old movie icon Bruce Willis was stepping away from his acting career due to being diagnosed with aphasia, tributes to the famed action star have been pouring in from all across Hollywood.

One of the most touching tributes thus far has been from John Travolta, who starred in and shared key scenes with Willis in the beloved Quentin Tarantino film Pulp Fiction, which has since become one of the definitive American movies of all time.

Taking to Instagram, Travolta told a short but sweet anecdote about the kind of “generous soul” that his good friend Bruce Willis is:

“Bruce and I became good friends when we shared two of our biggest hits together, Pulp Fiction and Look Who’s Talking,” Travolta wrote. “Years later he said to me, ‘John, I just want you to know that when something good happens to you, I feel like it’s happening to me.’ That’s how generous a soul he is. I love you Bruce.”

Johns Hopkins defines aphasia as “a language disorder caused by damage in a specific area of the brain that controls language expression and comprehension that leaves a person unable to communicate effectively with others.”

Given this unfortunate diagnosis, it’s difficult to imagine a scenario where Willis — who has reportedly been struggling with his cognitive decline on film sets in recent years — will ever take on another acting role. With a career as impressive as his, though, there certainly wasn’t anything left for him to accomplish: he’s already an acting legend.

RELATED: Questions Are Being Asked Of Bruce Willis’ Agents And Management As Report Reveals Extent Of Cognitive Decline