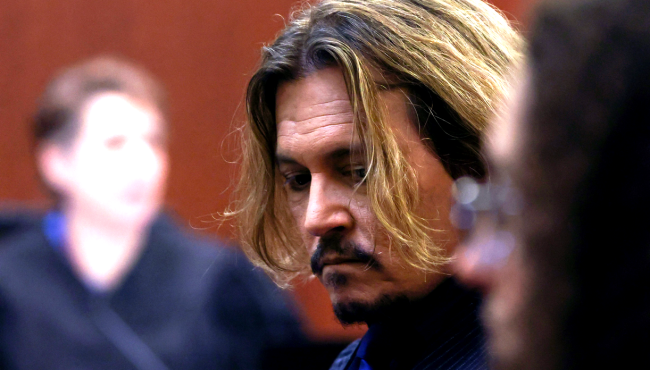 Back in 2020, Johnny Depp took his ex-wife Amber Heard to court in England suing her for libel. He lost that case, badly, and immediately became radioactive in Hollywood.

Not one to give up the fight, or because he is just a glutton for punishment, Depp and Heard are back in court this week as he sues her one more time for $50 million for the same alleged offense, an 2018 op-ed she wrote for the Washington Post. The difference this time, though, is that Heard is counter-suing Depp for $100 million.

And just like the trial across the pond, the testimonies in this Johnny Depp vs. Amber Heard case are already going off the rails.

During day two of testimony, one of Johnny Depp’s longtime friends and neighbors, Isaac Baruch, took the stand, and it wouldn’t appear as if he helped the actor’s case much.

People reports that during cross examination by Amber Heard’s lawyer Elaine Bredehoft, October 2016 text messages between Depp and Baruch were revealed, including one in which Depp referred to Heard’s “rotting corpse.”

Among those texts was one where Depp wrote that he hoped Amber Heard’s “rotting corpse is decomposing in the f—ing trunk of a Honda Civic.”

Depp also texted, referring to Heard, “That c–t ruined such a f—ing cool life we had for a while.”

In the first trial, Heard told the court a similar tale, claiming Johnny Depp attacked her and threatened to have sex with her corpse.

It was also revealed in that case that Depp had texted Avengers star Paul Bettany joking about “setting Amber Heard on fire and ‘f—ing her burnt corpse afterwards to make sure she’s dead.”

On day one of the proceedings, Heard’s lawyer said in her opening statement that Heard was the victim of a three-day “hostage situation” while with Depp in Australia.

Depp’s attorney, in response, said Heard is “a profoundly troubled person who manipulates the people around her” and “only advantageously surfaced years later once she was sued for defamation.”

As was the case in the first trial over in England, Depp’s attorneys are expected delve into Amber Heard’s relationship with Elon Musk while she and Depp were married. Stay tuned.