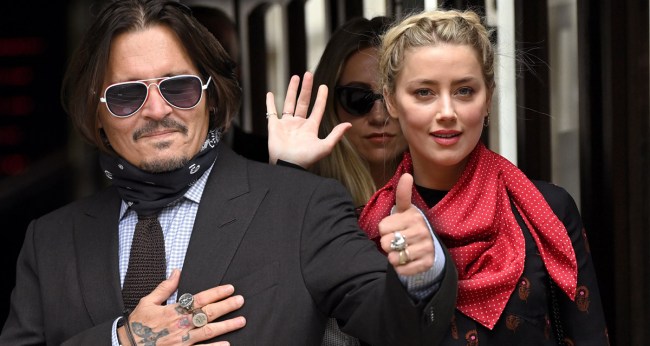 Day seven of the Johnny Depp libel trial versus The Sun over in England went pretty much the same as the first six days. It was filled with insane tales of the actor and his ex-wife Amber Heard’s completely off-the-rails relationship during their marriage of less than two years.

So far we have had allegations of threesomes involving Heard, Elon Musk and Cara Delevingne, accusations of Heard pooping in Depp’s bed, fights over Depp’s Winona Ryder tattoo, Depp accusing Heard of cheating on him with “rapist” James Franco, Depp sending texts to actor Paul Bettany joking about “setting Amber Heard on fire and ‘f***ing her burnt corpse afterwards to make sure she’s dead,” Musk having a “crooked dick,” and a photo of the aforementioned poop being admitted into evidence.

And that’s truly not even half of what’s gone on over the past week in this trial.

Speaking of the poop in the bed, during the proceedings of day six, a spokesperson for Heard told the New York Post, “This accusation is completely untrue and has been designed purely to humiliate Ms. Heard. As the evidence in court showed, Mr. Depp discussed committing such a prank for years beforehand and it plays to his lavatorial and abusive sense of humour. Mr. Depp’s team is trying to grab headlines – at the expense of the truth — and distract from the serious, central issue of this case: the perpetration of domestic violence.”

Apparently, Heard’s spokesperson wasn’t kidding because in a text to his then-assistant Stephen Deuters in October of 2013, the Pirates of the Caribbean actor wrote, “Will you squat in front of the door of the master bedroom and leave a giant coil of dookie so that Amber steps in it and thinks that one of the dogs, primarily Boo, has a major problem… It’ll be funny!!!”

The bed pooping took place after Heard’s 30th birthday party in 2016 following a fight between the couple and was discovered by Depp’s longtime housekeeper Hilda Vargas.

“I pulled back the top sheet on the bed and saw a large pile of feces,” said Vargas in a written statement to the court.

“I was horrified and disgusted. It was clear to me that this was human feces. I knew that the feces could not have come from either of Mr. Depp’s or Ms. Heard’s two small dogs. I have cleaned up after those dogs many times, and their feces are much smaller. Further, I have never known those dogs to defecate in the bed.”

Vargas also added, “Those feces were fresh … from the night or from the early morning.”

Those feces weren’t the only odd thing found in one of Depp’s residences by a member of his staff during his marriage to Heard.

The Post reports Johnny Depp’s estate manager Ben King testified that he once found Depp’s severed fingertip in a rental home the couple were staying in back in 2015.

The mirror behind the bar was heavily cracked and there was broken glass and other debris strewn on and around the bar,” King said in a witness statement, with images being shown in London’s High Court.

“I was told that Mr. Depp’s fingertip had been severed. Whilst cleaning up the broken glass and debris, I looked for the fingertip and found it on the floor of the bar area,” he said.

In the witness stand Wednesday, he recalled the carnage in the rental home after the fight that Depp, 57, admitted using blood from his injury to scrawl graffiti about his wife on mirrors in the house.

“The bar area had the most blood. There was a trail of blood spots up the stairs, and blood spots in the bedrooms, in one bedroom mainly,” King told the court, according to Sky News.

That same day, Depp was accused of trying to write Heard’s name in pee on the carpet, something which King says he cannot confirm.

“I did not see any signs of urine, and I did not smell it, as I would have done had someone urinated around the house,” King testified.