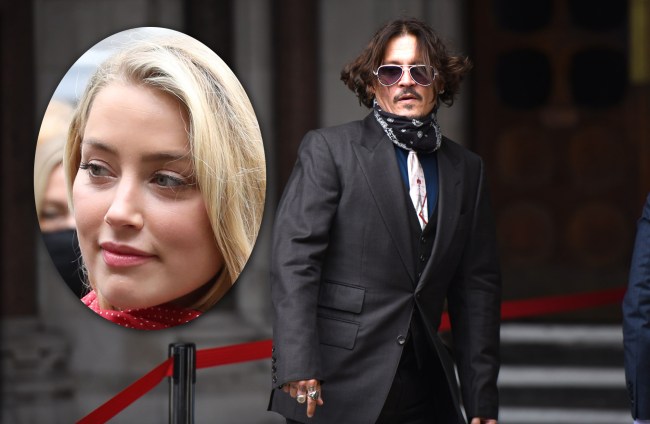 Honest to God, I had no idea what to put for the headline to this article. There was literally so much craziness put forth by both Johnny Depp’s side as well as his ex-wife Amber Heard’s side in day two of Depp’s libel trial against The Sun, I didn’t know where to begin.

I mean, how is it even possible that stuff more crazy than Depp saying Heard pooped in his bed on day one can it get?

Hold Mr. Depp’s beer. Or as testimony in today’s trial would have us believe, hold his “cocaine, half a bottle of whisky, a thousand red bull and vodkas, pills and two bottles of champagne.”

The second day of Depp’s trial saw the actor accused of attacking Heard in a cocaine and alcohol-fueled rage while aboard a plane and accusing her of cheating on him with “rapist” James Franco.

The Daily Mail, which is covering the trial over in England, filed this account…

He denied screaming about how Heard ‘liked getting f****d on set’ and making ‘vulgar’ comments while grilling her about sleeping with Adderall Diaries co-star Franco in 2014.

The Sun’s lawyer, Sasha Wass QC, said Mr Depp made ‘vulgar references to [Ms Heard’s] genitalia’ and called her a ‘go-getter sl**’ in front of crew members on a flight from Boston to LA.

He denied having launched the attack, commenting: ‘That’s quite a stretch of her imagination.’

Mr Depp claimed that he had been concerned about Franco because Ms Heard had described him as ‘creepy and rapey’ when they starred alongside one another in stoner comedy, Pineapple Express. He appeared to state that Ms Heard had told him she had to ‘run from Franco’s advances’ during filming – claims which Ms Wass branded as ‘made up on the spot.’

“I’m going to properly stop the booze thing, darling,” Wass read. “Drank all night before I picked Amber up to fly to LA this past Sunday. Ugly mate. No food for days. Powders. Half a bottle of whisky. A thousand red bull and vodkas, pills, 2 bottles of champers on plane and what do you get?”

Another text conversation between Depp and Bettany, the Pirates actor joked about “setting Amber Heard on fire and ‘f***ing her burnt corpse afterwards to make sure she’s dead.'”

And just like that, we have offically topped day one’s bed-pooping story.

Also during the day’s testimony, Depp claimed, “I suspected Ms Heard was having an affair with Mr. Franco and it’s since been confirmed that she was.”

He also disagreed with the notion that he was screaming obscenities at Heard on the plane.

“I was screaming obscenities at Ms Heard with my security, two pilots… A stewardess?” answered Depp. “I don’t agree with what you’re saying.”

Depp also claimed the Heard’s accusation that he was “making vulgar references to her genitals” was “quite a stretch of her imagination.”

In other testimony, the Daily Mail reports there was a photograph shown of “a glass table littered with mountains of alcohol and drugs, with four lines of cocaine cut for use next to his driving licence and a tube,” along with a skull and crossbones “pill box” with “Property of JD” written across the top, which Depp admitted “probably” contained drugs.

“Well she poured me the whisky and cocaine was visible in front of her, and I have experienced many times with Ms. Heard that she would in fact chop the cocaine up for me so that I could do the line and then she would press her finger into it and ingest it orally,” Depp claimed.

Also during day two of the trial, there was testimony about Depp’s 24-hour cocaine bender with Marilyn Manson, Depp and Bettany joking about “shaving Heard’s beaver,” how he “held Heard’s tiny Yorkshire terrier out of car window in a fit of rage,” how he “went berserk after a woman fondled Heard during an MDMA trip,” how Depp allegedly “slapped Heard while trying to torch painting by her ‘lesbian lover,'” and so, so much more.

It’s quite the read.

Check it all out over at the Daily Mail.