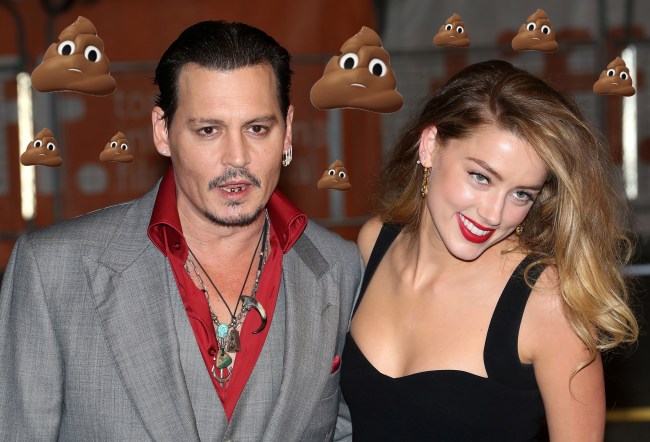 Depp has cut off his nose to spite his face. And his finger for good measure.

Actor Johnny Depp has released a photo of his severed finger, claiming his ex-wife Amber Heard threw a vodka bottle at him in 2015 pic.twitter.com/wDfE9zsjC7

But this case is getting cartoonishly absurd, even for a couple who looks like they’d

Phase 1: Causing a scene on a flight from Boston to L.A. after allegedly making vulgar references to Heard’s genitals after accusing her of cheating on him with “rapist” James Franco.

Phase 3: The court hears that Elon Musk has a crooked penis.

Phase 4: Depp gets boned out of $650 million from his scumbag business partner only to come home, take a few haymakers from his wife, and fall asleep with a human shit turd.

Phase 5: Your honor, for some reason, it is pertinent information if the court can visualize the log.

Embedding the photo in this article would be a STAIN on my journalistic reputation. Click at your own peril.

Housekeeper Hilda Vargas said in a written statement submitted to British court that she arrived at the celebrity couple’s penthouse  around 3 p.m. the day after the party to clean up — and heard another cleaning lady call to her in horror from the bedroom.

“She was pointing to the bed and told me that she couldn’t believe what she had found,” Vargas said, referring to the other maid.

“I pulled back the top sheet on the bed and saw a large pile of feces.

“I was horrified and disgusted. It was clear to me that this was human feces. I knew that the feces could not have come from either of Mr. Depp’s or Ms. Heard’s two small dogs.

“I have cleaned up after those dogs many times, and their feces are much smaller. Further, I have never known those dogs to defecate in the bed.”

Vargas, who has worked as Depp’s housekeeper in Los Angeles for more than 30 years, added in testimony, “Those feces were fresh … from the night or from the early morning.”

It is only a matter of time before this piece of shit takes the stand.