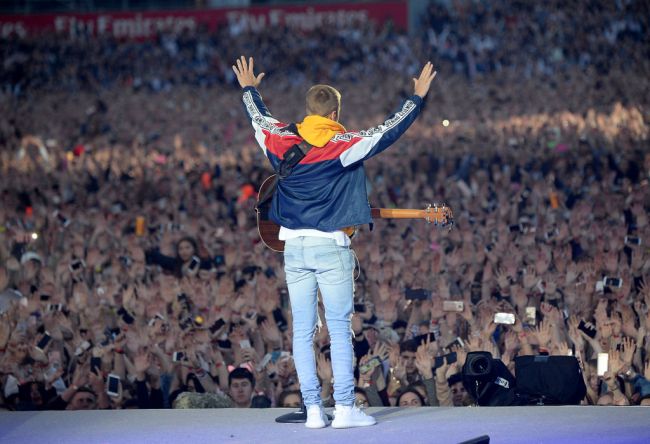 The fact that Justin Bieber hasn’t gone full Suns In 4 on one of these grovelers that have treated him like a circus animal for the past 13 years is just shy of a miracle.

Since he was 15, the dude cannot take a leak in a Jersey Turnpike rest stop without eliciting the kind of pandemonium typically reserved for limited-edition Supreme merch drops.

The internet got a first-hand glimpse of the everyday pitfalls of being one of the most famous humans on the planet this weekend after a group of female fawners loitered outside his New York City apartment waiting for him to arrive home.

He did, and just eight months after Bieber slammed “disrespectful” fans for camping outside of his $25 million Los Angeles home, he was inundated with a new batch of crazies on the opposite coast.

#justinbieber didn't appreciate fans waiting outside his home and tells them to respect his privacy 👀 pic.twitter.com/OtkcytPsS0

“I hear you, I hear you. But this is my home. You know what I mean? This is where I live,” he explains. “And I don’t appreciate you guys being here. You know when you come home at the end of the night, and you want to relax? This is my space to do that. So I would appreciate it if you guys could leave.”

It’s hard to imagine handling the situation with as much grace and composure as the Biebs did here.

This shit has to get so old. It’s everywhere.

Fan taken videos of Justin Bieber and Hailey Bieber out and about in Paris,France 🇫🇷 (June 22) pic.twitter.com/hbwL0D2JLW

This is why I chose not to be an international pop star.