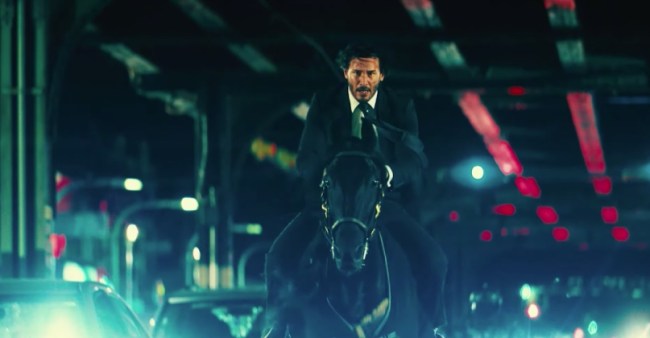 Keanu Reeves is set to reprise his role as Neo in The Matrix 4, but the Lana Wachowski-directed film isn’t set to start production until 2020. While we wait for Reeves back as Neo, let’s look back at Keanu’s role as the all-world assassin in John Wick and the training he went through for that epic horse scene from the movie.

For that crazy horse scene, Keanu Reeves trained hard for the impressive equestrian tricks. “The thing I like about him (Keanu) the most is: He has a lot of respect for the animals,” said Tad Griffith, veteran Hollywood horse trainer who worked on movies including Seabiscuit, Hidalgo and Jumanji: Welcome to the Jungle. “He learned all the different horses.”

RELATED: Ex-Navy SEAL Who Trained Keanu Reeves For ‘John Wick’ Swears By This 5-Minute Workout To Pump Him Up For The Day

“Riding a horse was too easy for Keanu Reeves so we had him do trick riding,” the behind-the-scenes clip says. Keanu says, “I wanna come in that speed, and then just go KA-BAH!” The behind-the-scenes video shows Keanu training for the incredible horse scene at a ranch.

But Keanu’s horse training dates all the way back to 1985. Keanu Reeves was the host of the Canadian Broadcasting Corporation (CBC) TV show Going Great that also appeared on Nickelodeon in the early 1980s. The children’s show featuring kids doing amazing things such as juggling flaming torches.

RELATED: Keanu Reeves Plays With Puppies While Revealing The Superhero He’d Most Want To Play And Craziest ‘John Wick’ Stunt

But in a 1985 episode of Going Great, a then-21-year-old Keanu Reeves received his first horse training. The Hollywood actor got an education on horse riding from a 16-year-old girl in Ontario, Canada. Keanu did so well that he received advanced training and was taught how to do horse tricks including a somersault dismount. Then 34 years later, Keanu is riding a horse in the huge Hollywood franchise.