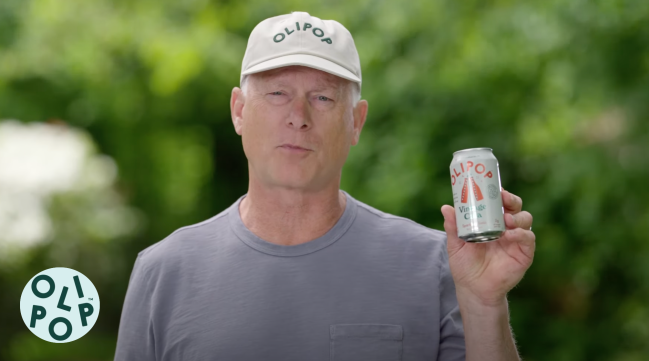 Presented in partnership with Olipop

Kenny Mayne’s employer asking him to take a 61 percent pay cut in his 27th stellar year on the job may go down as the most cold-blooded move in sports since The Decision, and just another reminder to take vacation days guilt-free. Even the best of us aren’t immune to the Bottom Line.

For the first time since Clinton was in office and frosted tips were an accepted fashion choice, ESPN’s “salary cap casualty” is at a professional crossroads. While broadcasting children’s mini golf games has been a natural evolution for Mayne, the gifted content creator has filled his days aligning with the brands he loves.

Mayne’s partnership with the wildly popular fizzy soda Olipop is a reminder that Kenny Mayne needs no boss, just a camera, his backyard, and his signature wit.

Mayne and Olipop’s Steven Vigilante appeared on our Endless Hustle to discuss the organic nature of their partnership and how the coupling represents a shift in how advertisers target celebrity endorsements.

5/11/21: @Kenny_Mayne makes an offhand comment on the @LeBatardShow about his love for the fizzy soda Olipop.

Mayne: "F*ck a free case, I wanna make a commercial."

One day after Mayne relinquished his role at ESPN. Mayne appears on The Dan LeBetard Show to discuss the breakup and within the first minute of the interview, drops an offhand comment about drinking Olipop at the moment.

“I’m trying to cut down my sugars. I’m trying to quit soft drinks…I like this stuff called Olipop. Olipop, if you want to do a commercial deal, “f*ck yeah, let’s do it.”

Olipop’s social media team was listening to the show, slid in his DMs, offering him a free case of the vintage soda.

Kenny found that offer to be cute, but had different ideas.

By this time, Olipop’s Growth Marketing Manager Steven Vigilante is Googling: How to get in touch with Kenny Mayne. He soon remembers that Twitter exists and jumps in Mayne’s DMs.

The pair jump on a call and Mayne admits that he’s been drinking two Cokes for 25 years and Olipop has been a long-awaited reprieve. Vigilante then claims Olipop is trying to expand from a “Whole Foods Mom” brand to an appealing option for a male audience who enjoy the taste of soda but care about their well-being.

Mayne recruits a couple local camera guys, takes to his backyard in some Olipop swag, and films a 30-second spot that would ultimately become the brand’s top performing Facebook ad.

This is how partnerships should be. Do we really think Blake Griffin drives a Kia? He dated Kendall Jenner.

Check out our entire interview with Mayne and Vigilante below and go drink some Olipop.