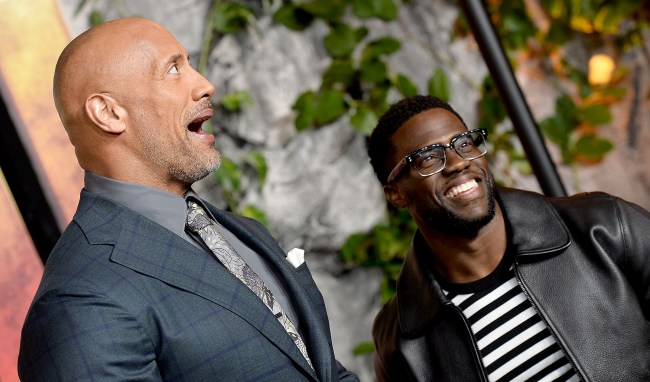 Never one to miss a chance to troll and/or make fun of his pal Dwayne Johnson, AKA The Rock, Kevin Hart dressed up in a Halloween costume identical to the legendary viral photo of an 80’s-era Rock, complete with turtleneck, gold chain, fanny pack, tissue for the elbow (can’t ever forget the tissue), and a hilarious wig mocking Johnson’s haircut from back in the day.

Hart, who returned to social media this week for the first time since his devastating car crash with an emotional Instagram video showing some of the grueling physical therapy he’s had to endure, goes trick-or-treating in the video to The Rock’s house where DJ has just given a bunch of kids “giant-sized” candy bars.

Of course, The Rock wasn’t very appreciative of Hart’s costume and instead of giving him a big candy bar, hands the comedian some “bite-sized, tiny, mini” treats, once again making fun of Hart’s diminuitive stature.

“I killed it with my Halloween costume this year…. @therock had the nerve to get an attitude with me. 😂😂😂😂😂,” Hart captioned the video.

Responding to the video on Twitter, Johnson wrote, “Of all the things my best friend @KevinHart4real can dress up as for Halloween..
He comes back from injury to stick me with this dirty, rotten, HEARTLESS LOW BLOW. 💔😂 Love ya brother.”

Of course, The Rock being the marketing machine that he is, this was all tied into the Thursday morning release of the first trailer for his and Hart’s new film Jumanji: The Next Level.