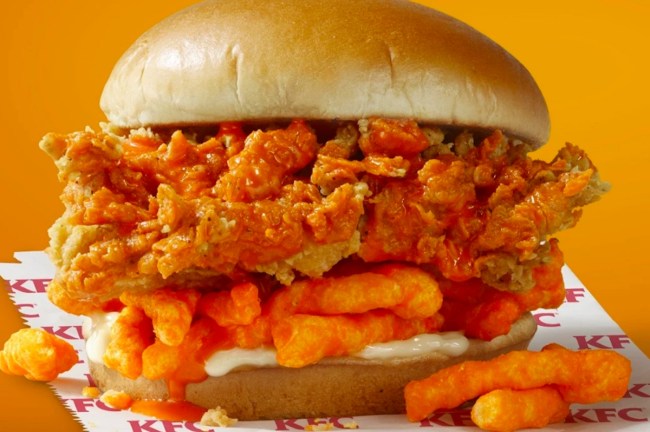 As BroBible’s resident junk food expert, I’ve come across a number of absurd creations whipped up by people who—much like the scientists in Jurassic Park— were so preoccupied with whether or not they could do something that they never stopped to think if they should.

These twisted minds have dreamed up burritos stuffed with spicy Pop Rocks and forks made out of French fries but there’s one particular ingredient they seemed to gravitate to more than any others: Cheetos.

Cheetos—especially the Flamin’ Hot variety— have served as the base for ice cream, spiced up mac and cheese bites, and coated the outside of the weirdest turkey I’ve ever made. They’re so versatile that someone even opened up a restaurant where every dish is made with the snack food.

Now, KFC has decided to get in on the game by throwing Cheetos on a chicken sandwich because why the hell not?

According to The Takeout, the Cheetos Sandwich recently made its debut at a number of locations in North Carolina, Virginia, and Georgia, where they’ll be served up for a limited time.

Here’s what you can expect according to a press release issued by the chain:

“Made by coating a juicy, hand-breaded Extra Crispy chicken filet with special Cheetos sauce and placing it on a toasted bun with mayo and a layer of crunchy Cheetos, the Cheetos Sandwich will give you a blast of craveable Cheetos in every bite.”

This is just one of a few new menu items KFC has birthed over the past year: they previously fired some shots at Chick-fil-A with pickle-fried chicken and blessed the world with their take on an iconic dish.

I’m not sure how the Cheetos Sandwich measures up, but if someone feels like shipping one my way, my DMs are wide open.