KFC Is Releasing A Line Of Crocs That Smell Like Fried Chicken Because, Sure, Why Not? 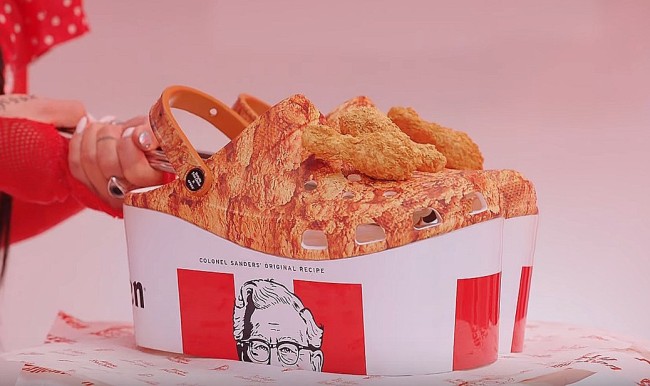 The fast food restaurants of the world are in a constant arms race to outdo each other, and in recent years, many of the planet’s largest chains have hired people to man their test kitchens who—much like the scientists in Jurassic Park—are so preoccupied with whether or not they can come up with a revolutionary menu item that they never stop to think if they should.

Taco Bell is probably one of the worst offenders when it comes to introducing bizarre twists on Tex-Mex staples ranging from burritos filled with spicy Pop Rocks to a quesadilla inexplicably stuffed with Kit Kats but they’re not the only restaurant under the Yum! Brands umbrella to continually pelt their culinary innovations at the wall to see what sticks.

Does anyone really need fried chicken that’s stuffed between a couple of donuts, a sandwich that’s littered with Cheetos, or a pizza featuring a crust made of breaded poultry? Maybe not, but that hasn’t stopped the good people at KFC from unleashing those products on the world over the fast few years.

Say what you will about the lack of hubris that led to John Hammond deciding to play god while attempting to open his ill-fated theme park but you have to admit he was a pretty shrewd businessman.

Sure, the dinosaurs were undoubtedly the star attraction, but his ultimate goal was to harness their power to build and grow the Jurassic Park brand and subsequently generate a massive amount of revenue by selling merchandise plastered with its signature logo.

Last year, Popeyes saw its revenue skyrocket thanks to the overwhelmingly successful release of the chicken sandwich that whipped the world into a frenzy, and last month, the chain decided to branch out when it blatantly ripped off Beyoncé and introduced its very own clothing line.

Now, KFC has decided to get into the fashion game as well, as it recently announced it was partnering with Crocs for a collaboration literally no one saw coming.

Was getting tired of my @crocs not being on the cover of PAPER Magazine. Yes, they are real. Coming Spring 2020

A platform version of the kicks—which feature two removable drumstick-shaped charms that smell like fried chicken—made their grand debut at a New York Fashion Week show on Tuesday but the signature version that put Crocs on the map is slated to go on sale to the general public this spring for $59.99 (you can sign up here to get updates on the release if you’re so inclined).