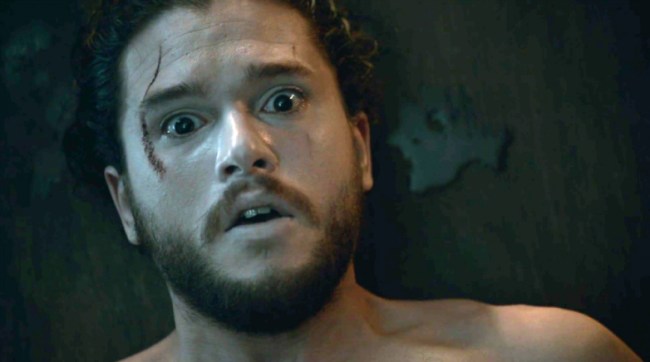 We are only 25 days, eight hours and 32 minutes until Game of Thrones returns. That’s when Season 8 begins and there are six episodes left in the hit HBO TV series, many of them are movie-length (read about that HERE). One person happy that Game of Thrones is ending is actor Kit Harington because portraying Jon Snow took an emotional toll on him and forced him to go to therapy.

Harington gave an interview to Variety where the GoT actor talked about the last day of filming. “I took off the costume, and it felt like my skin was being peeled away,” Harington. “I was very emotional. It felt like someone was shedding me of something.”

In January, Harington said that “the last season of Thrones seemed to be designed to break us.” The actor added, “Everyone was broken at the end. I don’t know if we were crying because we were sad it was ending or if we were crying because it was so f*cking tiring. We were sleep deprived. It was like it was designed to make you think, ‘Right, I’m f*cking sick of this.’ I remember everyone walking around towards the end going, ‘I’ve had enough now. I love this, it’s been the best thing in my life, I’ll miss it one day – but I’m done.’”

In this week’s interview, he reiterated that point by saying that shooting Season 8 was difficult on the cast. He said the cast were subjected to “extreme weather and just in heavy f*cking costumes.” Harington said he saw Tyrion Lannister actor Peter Dinklage “just break down” at the end of production. So is this a spoiler that Tyrion makes it to the end of Game of Thrones?

Harington also said that playing Jon Snow took an emotional and mental toll on him. But for all the stress of the shoot, saying goodbye is never easy. Harington, who wrapped up production a day after Dinklage (Is that a prediction that Tyrion dies before Jon?), said he was suffering from “a huge heave of emotion” and he was “just blubbing.”

Harington also divulged that he cried at the table read of the final season when he found out Jon’s fate. “The end of Jon’s journey, whatever that may be… I was satisfied with how his story ended.”

But the toughest part about staring in the biggest TV show on the planet didn’t happen in the final season of Game of Thrones, but rather Jon Snow’s resurrection in Season 6. In the Season 5 finale, fans wept over the death of Jon Snow, or should we say Aegon Targaryen, but it was even more traumatic for Harington.

“My darkest period was when the show seemed to become so much about Jon, when he died and came back,” Harington told Variety. “I really didn’t like the focus of the whole show coming onto Jon — even though it was invalidating my problem about being the weak link because things were about Jon.”

“When you become the cliffhanger of a TV show, and a TV show probably at the height of its power, the focus on you is f*cking terrifying,” Harington said. “It wasn’t a very good time in my life.”

“I felt I had to feel that I was the most fortunate person in the world, when actually, I felt very vulnerable,” he revealed. “I had a shaky time in my life around there — like I think a lot of people do in their 20s.”

The pressure of being a star of Game of Thrones forced Harington to seek help. “That was a time when I started therapy, and started talking to people. I had felt very unsafe, and I wasn’t talking to anyone. I had to feel very grateful for what I have, but I felt incredibly concerned about whether I could even f*cking act.” So does this mean that Jon Snow doesn’t make any more resurrection tricks in the final season?

Also in the interview, Harington may have accidentally leaked a spoiler for the final season of Game of Thrones. According to Harington, Jon Snow makes it until the end of Game of Thrones. “I was there the whole time this year,” Harington said. “I felt a bit like people were coming in and out, and Jon Snow was just f*cking there the whole time.” Jon Snow fans can rejoice that their character made it to the end… for now.

Harington noted that he and his Game of Thrones castmates started to dislike one another during the filming of the final season. “You have these in-jokes, and these relationships that thrive for eight years. That’s a long time for those jokes to be going, and they never felt old or tired,” Harington revealed. “In the last season, I was like, these are getting tired now. And I think they got tired because we could see the end coming. That’s a way of emotionally detaching from something: relationships very slightly starting to strain, just on the edges, just frayed. Now everyone loves each other again.”

In some positive news about the last Game of Thrones season, Harington said the showrunners “went balls out” in Season 8. “They could have easily set the same budget as they did for season 7, but they went bigger.” Game of Thrones has a release date of April 14th on HBO.