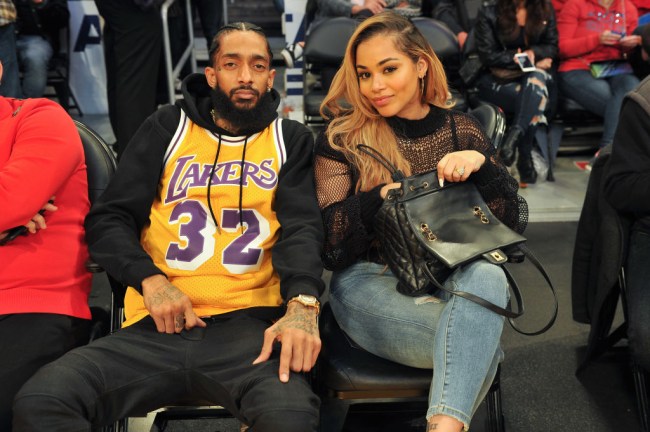 Despite Nipsey Hussle being shot to death only a few days ago, Kodak Black attempted to woo his girlfriend Lauren London. Kodak Black called Lauren London a “hot widow” and would “allow” her a year to get over the death of the father of her child. The internet came for Kodak Black on Saturday and now the Florida rapper is apologizing for his comments that were deemed “insensitive.”

Kodak Black was criticized savagely after he was shooting his shot with Lauren London with an approach that was not exactly the sweet-as-honey. “Lauren London that’s baby, though. She about to be out here single,” Black said in a video. “She’s finna be a whole widow out here. I’ll be the best man I can be for her. I’ll give her a whole year. She might need a whole year to be crying and sh*t for him.”

"She fittin' to be a whole widow out here. I'll be the best man I can be for her. I'll give her a whole year. She might need a whole year to be crying and s—- for [Nipsey].” pic.twitter.com/ZFkwLNk7P9

On Sunday, Kodak Black realized the error of his ways and gave an apology to Lauren London. However, the apology did not mention Nipsey Hussle by name and Kodack Black only referenced him as “dude.”

“If I disrespected you Lauren London, in any shape or form, I’m sorry, even though I didn’t,” Kodak said in an Instagram Live video. “And rest in peace to dude. Y’all already know what I said. I said dude encouraged me to do (expletive) for the community. But, anyhow, my bad to them two.”

On Saturday, fellow rappers T.I. and The Game called out Kodak for attempting to holler at Nipsey’s girl.

Tank also had a few words for Kodak Black pic.twitter.com/vRzcjvYFXq

“We stand with the family of Nipsey Hussle and are appalled by the disrespectful and poor comments made by Kodak Black,” DJ Justin Credible tweeted on Saturday. “With that, Power 106 will not support Kodak Black’s music.”

We stand with the family of Nipsey Hussle and are appalled by the disrespectful and poor comments made by Kodak Black. With that, Power 106 will not support Kodak Black’s music. #LongLiveNip 🏁🏁🏁

RELATED: Nipsey Hussle’s Alleged Killer Shook Hands With Him Before Killing Him Out Of ‘Jealousy’

Last week, Kodak Black was charged with first-degree criminal sexual conduct after a woman claimed he raped her at a hotel room in 2016 after his concert in Florence, South Carolina. The woman was an adult-age high school student.

RELATED: LeBron And The Lakers Paid Their Respects To Nipsey Hussle In A Touching Tribute To The Fallen Rapper