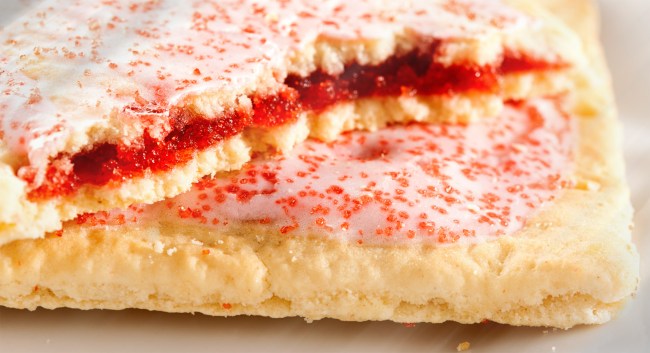 Many times when it comes to the American legal system, lawsuits are one hundred percent appropriate. Like when the McFlurry machine makers were hit with a lawsuit over making them easier to fix, or when Gwyneth Paltrow’s Goop was sued over a exploding “This Smells Like My Vagina” candle.

Other times, the reasoning behind a lawsuit can be, well, a little dubious. Such as when a woman sued Bagel Bites because she was shocked they contain artificial ingredients, or when a man filed a lawsuit because “Hawaiian Rolls” aren’t actually made in Hawaii.

Take a wild guess which category of lawsuit a woman who is taking Kellogg’s to court because she claims they have been misleading consumers about the amount of strawberries in their Frosted Strawberry Pop-Tarts falls under.

Related: Texas Man Awarded $5.5 Million In Lawsuit Against Bar For Overserving Him Alcohol

The lead plaintiff Anita Harris “claims Kellogg’s engaged in negligent representation, fraud, and unjust enrichment by exaggerating the amount of strawberries in Frosted Strawberry Pop-Tarts in online promotions and on the product’s packaging,” according to TopClassActions.com.

She claims that this violated the Illinois Food, Drug and Cosmetic Act because Kellogg’s does not accurately identify or describe “the basic nature of the food or its characterizing properties or ingredients.”

Much like with a recent lawsuit against Subway over the authenticity of the tuna in their sandwiches, Harris’ suit claims, “Based on a quantitative estimate and analysis of the filling, it appears to or may even contain more non-strawberry fruit than strawberry ingredients.”

The best part of this lawsuit might be the fact that this isn’t the first time Kellogg’s has been sued over their Frosted Strawberry Pop-Tarts.

“Consumers do not expect a food labeled with the unqualified term ‘Strawberry’ to contain fruit filling ingredients other than strawberry, and certainly do not expect pears and apples, as indicated on the back of the box ingredient list,” Brown’s class action lawsuit states.

And don’t even get people started on the proper amount of berries consumers should expect to be in Kellogg’s Mixed Berry Breakfast Bars!