Want To Compete On The ‘Legends Of The Hidden Temple’ Reboot? Here’s How Apply To Live Your Childhood Dream 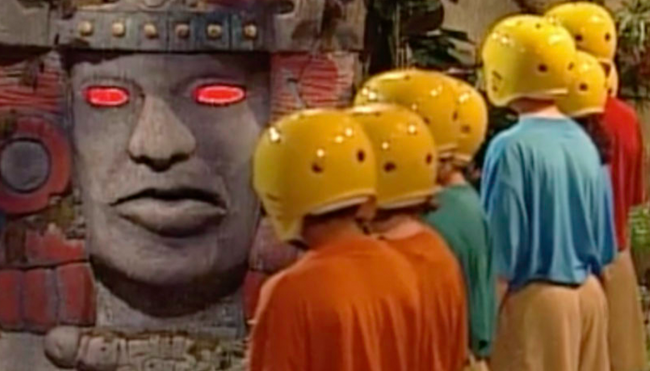 The term “flex” may have not been part of the modern parlance in the 1990s, but there’s no better way to describe the truly unparalleled amount of cultural clout that came with living basically every kid’s dream: getting to compete on a game show on Nickelodeon.

Sadly, I was never lucky enough to get to fill a cart to the brim while sprinting through the aisles of a Toys“R”Us, wade my way through a kiddie pool filled with ice cream to help my family win a set of World Book encyclopedias, or attempt to secure a piece of the Aggro Crag while Mike O’Malley cheered me on. Hell, I couldn’t even get my parents to get me a subscription to Nickelodeon Magazine no matter how many times I said “please,” so I was forced to live vicariously through those who were lucky enough to live my dream.

As a result, I was absolutely amped to learn a Legends of the Hidden Temple reboot was in the works a couple of years ago designed to give anyone who missed out on the chance to be a member of the Blue Barracudas in their youth a second shot at glory. The series was originally supposed to make its grand return on Quibi before the ill-fated streaming service choked harder than a kid in the Shrine of the Silver Monkey, but thankfully, Deadline reports The CW has stepped in to save the day—and, more importantly, is currently looking for contestants.

According to the website set up by the casting company, anyone over the age of 21 who can make their way to Los Angeles when the revived Legends of the Hidden Temple starts shooting in July can currently recruit a teammate and submit an application to earn a spot.

In addition to all of the requisite personal information, you’ll be asked to answer a variety of questions concerning your knowledge of the show and why you’d be worthy contenders, including your strengths, weaknesses, and potential fears (they don’t explicitly ask if you’d instinctively punch a Temple Guard in the face if one jumped out at you, but I assume they’re just operating under the assumption anyone who watched the show back in the day won’t be able to resist the urge to do so.)

I’d wish you all the best of luck, but I’m not going to put any negative karma into the universe that might hurt my chances.