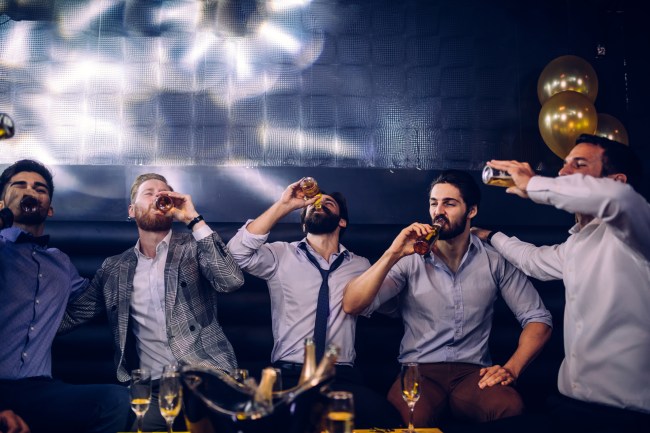 A slew of trendy individuals presumably concerned about the hardening state of their livers has ditched booze in January. This lunacy has been deemed “Dry January,” and it’s sort of a nod to the fine line of alcoholism that some of us dance along most days. It gives all of those people who poured it on heavily over the holidays an opportunity to show their family and friends that they can moderate their alcohol consumption and that the time has not yet come for them to claim their 24-hour sobriety chip. Repeat after me, “I am not an alcoholic, I just don’t like being sober.”

There is an argument to be made, however, that most of the sober 30-day challenges that have become so popular as of late are really just excuses for attention-starved troglodytes to latch onto the tits of the social media world and feed like the ravenous douche hounds that they are.
Look at me, friends, I haven’t had a drink in 15 days, which not only makes me a good person but undoubtedly one better than you. Like this post if you’re jealous of my awesomeness, comment if you too are a sniveling specimen of desperation who also gave up booze for a month for all of the wrong reasons. #boozersarelosers.

But what might seem like just another hipster fashion for bored generations just might be the beginning of a sober society. There is apparently a “Moderation Movement” sweeping the United States, and it is prompting alcohol makers to give serious considering to the possibility of alcohol-free products becoming their bread and butter at some point soon.

The booze-free market is now more than just O’Douls non-alcoholic beer, which actually contains 0.5 percent alcohol, other major brewing companies are trying to get the attention of the pseudo drinker.

Heineken recently put a non-alcoholic beer on the market – one that contains 0.0 percent alcohol – in hopes of attracting this new alcohol-free clientele that spreading like a bad case of jungle clap. The company says it is looking to Spain for inspiration on its latest leap of faith. Zero-strength beer makes up about 10 percent of the booze market in the part of the world, which is something that Heineken brand director Gianluca Di Tondo believes will hit the United States and beyond within the next decade.

“We want to make Heineken the leading global beer brand in 0.0,” he said in an interview with Reuters.

While drinking booze-free booze might sound insane, there appears to be some validity in this movement.

Anheuser-Busch InBev, which is home to N/A godfather O’Douls, said last year that it was upping its position in the non-alcoholic market. The brewer hired a new chief non-alcohol beverage officer who is responsible for leading the company’s non-alcoholic sector from its current 10 percent of sales to somewhere around 20 percent in the next ten years.

Alcohol-free beverages seem to be taking shape because Millennials and Generation Z are less enthusiastic about drinking alcohol that the generations that came before them. Drinking just isn’t as attractive to young people, as they are more aware of the nasty effects that alcohol consumption can bring.

Some believe that marijuana legalization is behind this trend. Perhaps this is the reason several major brewers are currently working to bring cannabis-infused beverages to the Canadian market, where weed has been fully legal since last October. This year, it is expected that Constellation Brands and Molson Coors will roll out a THC-infused beverage in the northern nation.

There is also evidence that people are drinking less in states that have legalized marijuana. The latest data shows that binge drinking is on the decline in parts of the country where weed is legal option. “In legal adult use cannabis states, the number binge drinking sessions per month (for states legal through 2016) was -9% below the national average,” according to a report from Wall Street investment firm Cowen & Company.

Cannabis advocates have been selling legal weed as the “safer alternative to alcohol” over the past several years, it appears the people have bought in.

But the alcohol industry says marijuana isn’t causing it any harm. The Distilled Spirits Council recently published a report showing that while beer and wine have taken a hit in parts of the country with legal weed (Colorado, Washington and Oregon), hard liquor sales are still alive and kicking.

“At this point, we’ve seen no impact on spirit sales from legalized recreational marijuana,” said Chris Swonger, CEO for the council.

The bar scene is getting into the mix of non-alcoholic drinks. Aside from more watering holes now offering a variety of alcohol-free options on their menus, there is a new concept underway in which no-proof bars are becoming a thing. These places, which are still reserved for adults 21 and over, are geared toward that particular breed of socialite who doesn’t necessarily enjoy getting buzzed every time they go out, but they want nothing to do with traditional sober hangouts, like movie theaters. The selling point is that adults can still have a booze-free social life – mixing and mingling with strangers – without giving up the experience of frequenting establishments that have the bar feel.

But are we moving toward a more sober society? Well, that’s a tricky question considering the current state of affairs. American may have consumed less alcohol in 2018 (a decline of only 0.8 percent), but booze is far from losing its appeal. Excessive alcohol use in the United States is still raking in around $250 billion a year, and the population remains hellbent on getting hammered on the regular. Some of the latest data shows that 37 million adults are binge drinking at least once a week. And let’s face it, even the people using marijuana as a replacement for alcohol are still far from sober. Toss in the fact that the nation is still being rattled by a huge opioid epidemic, not to mention the resurgence of illegal drugs from cocaine to methamphetamine, we’d say the American population is pretty fucking far away from being considered sober.