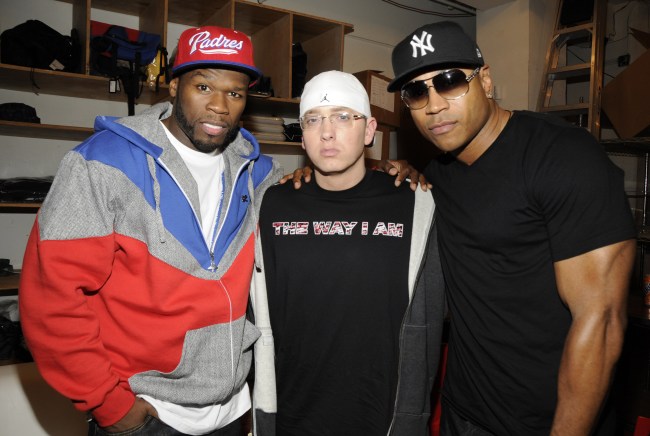 Eminem has been engaged in multiple rap beefs with Nick Cannon, Machine Gun Kelly, Lord Jamar from Brand Nubian, and people who are enraged with lyrics on his latest album Music To Be Murdered By. But one hip-hop artist who Eminem has absolutely no animosity towards is LL Cool J.

LL Cool J launched his own fashion line Rock The Bells a week ago, which according to the iconic rapper “represents all the elements of classic hip-hop culture: Graffiti, DJ’s, breaking, MC’s – through a modern lens.” The brand gets its name from LL’s third single from his 1985 debut album Radio that went platinum after selling 1 million copies.

The fashion line features a varsity jacket that has “Rock The Bells” on the front and back. Ladies Love Cool James sent a customized Rock The Bells jacket to Eminem. Marshall Mathers posted a photo of the “incredible @rockthebells varsity jacket” on Instagram.

Thanks LL for this incredible @rockthebells varsity jacket…it came in a boombox box!

More importantly, can we get an LL Cool J/Eminem collabo? Unfortunately, the two iconic rappers have never worked together on a track.

RELATED: Scottish Rapper Released ‘Music To Be Murdered By’ Track 5 Years Ago With Same Artwork And Same Samples Eminem Used

Eminem also said that LL Cool J was one of the key rap artists who inspired him to be a rapper, advanced the rap game, and said Mama Said Knock You Out was a revelation to him. You can listen to the entire 2018 interview with Eminem from LL’s The Influence of Hip-Hop radio series.

The jacket is part of the Rock The Bells Drop 1 line “consists of premium brand collaborations and exclusive Rock The Bells-designed products.” The Def Jam rapper also sent one of his jackets to Dr. Dre.

Representin for my brother @llcoolj and @rockthebells!!!

LL Cool J and Dr. Dre collaborated on the 1998 single Zoom off the Bulworth soundtrack.