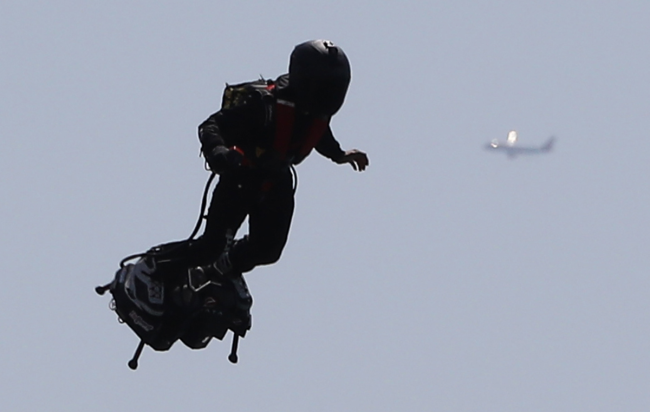 Based on everything the Back to the Future sequel led me to believe, we should currently live in a world where it’s possible to get wherever you need to go without ever touching the ground. Sadly, it seems like we’re going to have to wait a while until flying cars and hoverboards become the norm, but it’s good to know we’re headed in the right direction based on the recent advancements in jetpack technology.

Last year, someone in Dubai showed Elon Musk what the real real-life version of Iron Man looks like when he strapped on a jetpack and almost hit 150 MPH on his way to flying 5,000 feet in the air, and there may soon be a day when hikers who find themselves stranded in the wild will see a paramedic swoop in on one to rescue them.

While those EMTs may be planning on using jetpacks for a good cause, someone in Los Angeles stirred up some trouble last August when pilots spotted a guy flying alongside their plane as it was landing at LAX. The FAA quickly launched an investigation, but they failed to track down the same person who presumably got their jetpack on in the vicinity of the airport the following month (and may have also been captured on video in December).

Some internet sleuths joined the feds who were looking into the issue, and according to Gizmodo, a website called The Black Vault filed a Freedom of Information Act request to obtain copies of conversations between the FAA and members of air traffic control, and it turns out “Jetpack Guy” might not even be a person at all—and the “jetpack” might not even be a jetpack.

It appears one of the pilots that saw the Unidentified Flying Person told investigators he’d watched a YouTube video featuring a mannequin attached to a Duocopter drone that looked virtually identical to what he’d observed outside his aircraft (it’s worth noting it was filmed in Germany, so it seems unlikely the people behind it are responsible for what’s going on in California).

Now, as much as I’d like to believe there’s a guy in Los Angeles who’s been doing his best to imitate the gremlin that terrorized William Shatner on an episode of The Twilight Zone, if you buy into Occum’s razor, someone throwing a drone onto a dummy seems like a much more likely explanation—and it’s also kind of a  bummer.