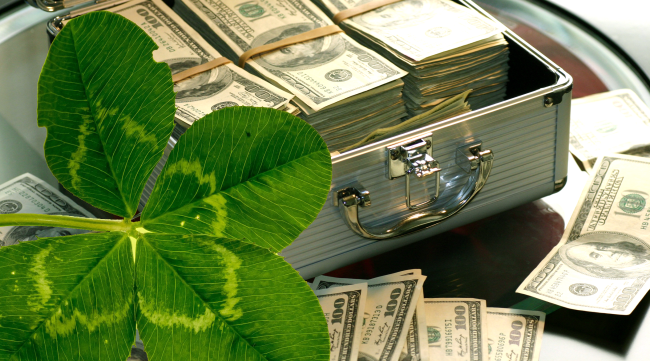 Okay. Now this is getting beyond ridiculous.

In the past month, we have seen a Massachusetts man win a $15 million lottery jackpot after already winning $1 million.

We have also seen a Virginia man win a $1 million lottery jackpot, adding to the $2.5 million prize he already won in 2014.

And now we’ve got a guy in North Carolina winning a $100,000 lottery prize after he already took home a $1 million jackpot… TWICE!

Terry Splawn of Concord, N.C. might actually be the luckiest human being on the face of the planet.

In April of 2017, Splawn won $1 million from a Millionaire Bucks ticket he bought at Sam’s Mini Stop in Concord.

Then, in March of 2019, he won a second $1 million prize from a $150 Million Cash Explosion scratch-off ticket that, you guessed it, he purchased at Sam’s Mini Stop.

Then, because why wouldn’t you keep playing the lottery if you were him, Splawn bought himself a $20 Premiere Cash ticket, from Sam’s Mini Stop, and wouldn’t you know it, but he won another $100,000.

“It was on Labor Day,” Splawn told North Carolina Education Lottery officials. “So, it was a really nice surprise for the day.”

After taxes, Splawn pocketed a cool $70,756 from his latest unlikely win.

Bro’s next lottery play should definitely be the North Carolina Education Lottery game Lucky For Life.

By the way, Terry Splawn isn’t the only ridiculously lucky person to play the lottery in North Carolina recently. Back in May, Max Bouldin of Trinity won $1 million from a $10 Jumbo Bucks scratch-off ticket… less than three years after winning a different $1 million jackpot!

Behold the face of the luckiest man ever…

Terry Splawn of #Concord is no stranger to good luck. In fact, a Labor Day $100,000 win made Splawn a three-time winner of a big #NCLottery prize! “It’s unbelievable,” he said. “It certainly is fun to win.” Congrats, Terry! https://t.co/3NLVYeralN pic.twitter.com/i46oC0uXZ6

“It’s unbelievable,” Splawn added. “It certainly is fun to win.”