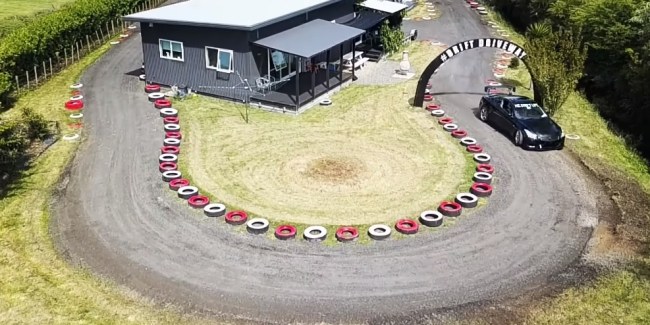 What do you have some tiny spec of real estate in your leaky basement between your wife’s out of season clothes and an unused Bowflex that you call your “mancave?” Takeshi Teruya one-ups you with his own drift track around his house.

Teruya is a husband and father to two daughters, but he is also a racer. And while he might not have the free time that he used to for racing, he took matters into his own hands to make sure that he would have enough time for getting behind the wheel by bringing the racetrack to him. Teruya constructed his own personal racetrack around his house.

Teruya has been competing in drifting competitions for years and wasn’t about to give up his love of motorsports when he got married or when he had kids. Teruya, who is originally from Japan, moved to Hamilton, New Zeland in 2007 and purchased this property and began planning his personal racetrack.

“A few years ago, I attended the Leadfoot Festival in Hahei where the races took place at Kiwi motorsports legend Rod Millen’s driveway,” Teruya told the New Zeland Herald. “That inspired me a lot, so when I came back I started planning on how I can have my own drifting track at my house.”

The 37-year-old mechanic constructed the 425-foot drift track for the price of $10,500. He aptly named his personal racetrack the “Drift Driveway.” Teruya found that his neighbors were also car lovers so they were all for a racetrack being built in their neighborhood. The neighbors were so in favor of a neighborhood drift track that they even helped Teruya build the Fast and Furious track.

However, Teruya’s wife wasn’t so enthusiastic about the project. “Who in the right mind builds a race track around your own house?” she said. But since the track has been built she has warmed up to a racetrack in her front yard. “It is really good for the kids’ scootering and push bikes, so now we don’t even have to go to the parks.” Hey, if your wife is going to be pissed at you than you might as well make it worth getting in trouble by making your front yard a drift track.