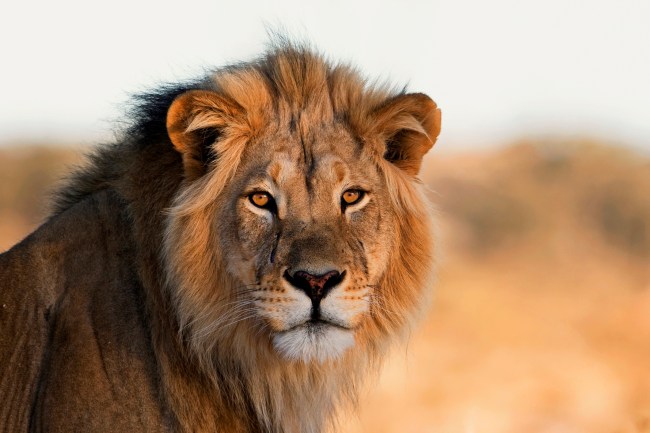 I guess the term ‘mentally unstable’ in the headline is implied because no level-headed human being would ever climb a fence and jump into the lion enclosure at a zoo, sit down cross-legged in front of a fully-grown male lion, and then move around in an attempt to taunt the lion.

This incident took place at the Delhi Zoo in India and the man was filmed just feet away from the lion. According to reports, security tried to stop the 25-year-old from jumping into the lion exhibit but couldn’t get to him in time to stop it from happening.

Miraculously, the man survived. I say ‘miraculously’ because it’s a legitimate miracle to come face to face with an adult lion and walk away unscathed. That lion could’ve taken his life in a matter of seconds.

I’m pretty shocked that someone had their camera rolling throughout the entire encounter. However, it appears as if the person who filmed the incident was recording everything used a g’damn potato because the grainy footage isn’t anywhere close to HD.

According to David Strege at For The Win, eyewitnessed reported watching the man jump a fence, get over a concrete wall, cross a moat, and more before he sat down in front of the lion:

Eyewitnesses told the Times of India that Khan hopped over a fence and stood on a foot-high concrete wall for a while before jumping into the moat about 10 feet below. He waded through knee-deep water and found a dry spot where he lured the lion to him and tried to provoke it.

Once inside [the enclosure], he kept luring the lion,” witness Zamir Alam told the Times of India. “If the zoo authorities had not intervened, he would have been mauled by the lion.”

Anish Andheria of the Wildlife Conservation Trust told NDTV “a lion this size can kill a human being within 15 seconds.”

Zoo officials, along with police and a fire team, managed to chase the lion away and tranquilized the animal before surrounding Khan and pulling him out of the enclosure via ropes and ladders. (via For The Win)

The Times of India reported the ‘mentally unstable’ man would later tell the police he was depressed about losing his job and that’s what drove him to jump into the lion enclosure.

For a full rundown of the incident, you can click here to visit FTW.