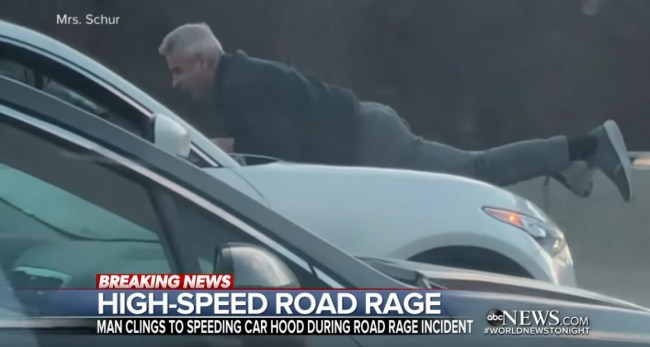 We have witnessed some crazy road rage incidents over the years here, but a 65-year-old man clinging to the hood of an SUV going up to 70 miles per hour? That is most definitely a new one.

And that’s exactly what happened to senior citizen Richard Kamrowski on the Massachussetts Turnpike on Friday when the driver of an SUV tried to leave the scene of an accident.

According to WFXT-TV Boston…

The 65-year-old Framingham resident says it all started when a small accident on the Pike sideswiped his truck. A confrontation with the SUV driver occurred, and Kamrowski somehow ended up on the hood of that SUV.

For nearly three miles, he was hanging on as the SUV traveled at speeds of up to 70 miles per hour.

“I thought he was going to run over me and I don’t know I don’t think he stopped he just kept going fast then slow, fast then slow trying to get me to slide off and I wasn’t getting off the car,” Kamrowski said.

Now, the driver of the SUV, 37-year-old Mark Fitzgerald of Lynn, is facing charges of assault with a dangerous weapon, negligent driving, and leaving the scene of an accident involving property damage, according to Massachusetts State Police.

Mark Fitzgerald, the man wearing the sunglasses, walked into Waltham District Court this morning alongside his lawyer. Fitzgerald faces several charges following an alleged road rage incident on the Mass Pike where another man ended up on the hood of his car for 3 miles. pic.twitter.com/WO1ybcFrfa

Oh, by the way, Kamrowski is also facing a charge of disorderly conduct, because apparently climbing on the hood of a vehicle as it’s attempting to drive away is frowned upon.

As for what finally brought Fitzgerald and Kamrowski to their senses and stop all of their nonsense? A guy with a gun, of course.

WFXT reports that another driver, a licensed gun owner, according to State Police, got out of his car, pointed his gun at Fitzgerald and ordered him to get out of his SUV.

The man with the gun, who was also caught on video (below), was not charged with any crimes.