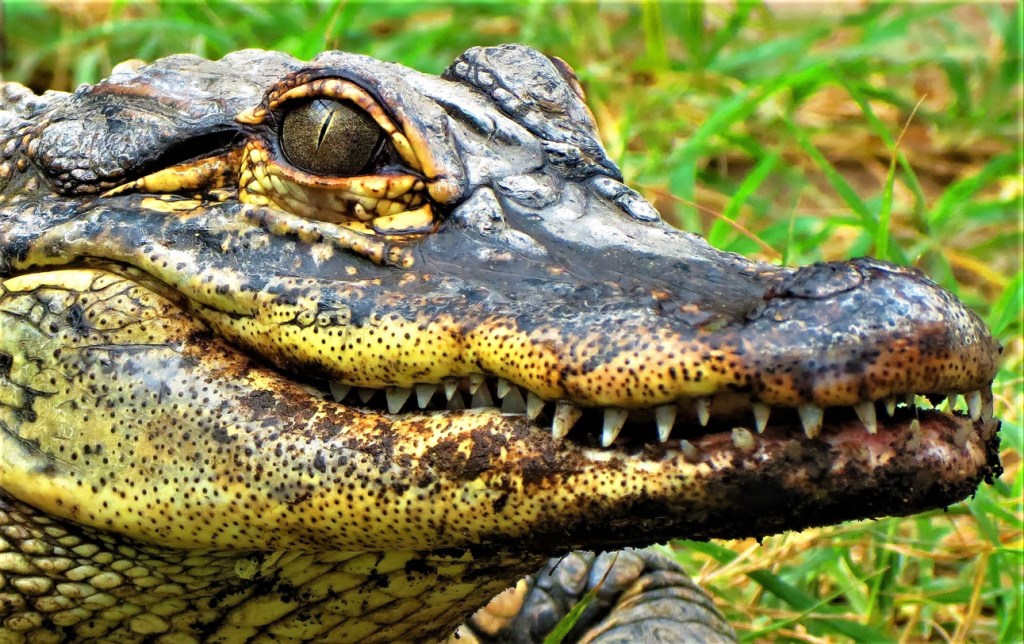 In what might be the strangest physical altercation of the year, a man picked up a caiman in Brazil during a beach brawl and used the crocodile to defend himself. The parties were eventually separated by a lifeguard and what led up to this moment is unclear, nor is it immediately clear why there was a crocodile there to begin with.

There are multiple species of caiman native to Brazil including the spectacled caiman, black caiman, dwarf caiman, and others. I wish I could tell you what species of caiman we see in the clip below but the footage looks like it was filmed using a potato.

Caimans are members of the crocodile (Crocodilia) order and shared the Alligator (Alligatoridae) family with the American Alligator found all throughout the southeastern United States. We don’t have Caimans in the USA but they often look familiar because they can be so similar in appearance to alligators.

Now, imagine for one second you’re at the beach in Florida and look up to see two guys fighting and one of them picks up an alligator and uses it as a weapon. Of course, this might not seem so strange since we’re talking about Florida but I was born and raised in Florida and I’ve never seen anything like this before. Thankfully, nobody appears to get hurt (including the caiman):

Someone told me years ago that if I ever felt like I was going to lose a fight and there was no way to avoid it, I should strip off all my clothes and act insane. Nobody wants to fight a crazy person in their birthday suit. And I think this really is a natural extension of that. Nobody in their right mind would want to fight a person holding an angry crocodile.

A report in the Daily Mail states the brawl was broken up by a lifeguard. After that, the caiman was rescued by some firefighters who later released the caiman back into the wild.

This all went down at Macumba beach in Rio de Janeiro. Everything I know about that location I just learned from Google. It has a 4.5 out of 5-star rating on TripAdvisor. There’s also a ‘Macumba Cult’ in that part of Brazil which combines elements of Christianity and VooDoo. The beach is considered a great spot to get away from the chaos of Rio’s city center and a good place for ‘beginner’ surfers. Just watch out for dudes swinging crocodiles as weapons.

Last but not least, if you are fascinated by Caimans there are a LOT of cool videos on YouTube. Here’s one about swimming with them in Brazil and another video that dives into the differences between Caimans and Crocodiles: