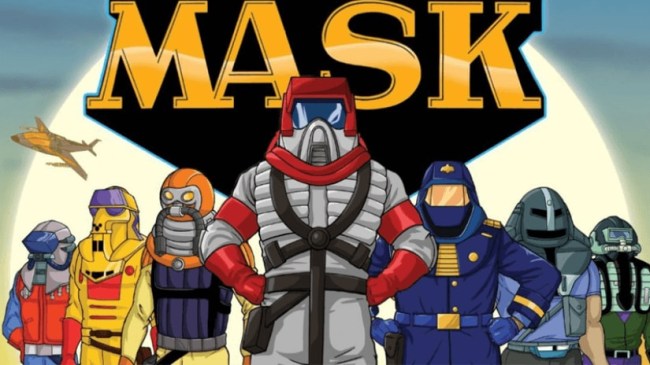 M.A.S.K., which as everyone obviously knows stands for Mobile Armored Strike Kommand, starting fighting V.E.N.O.M., which as everyone obviously knows stands for Vicious Evil Network of Mayhem, with sophisticated, transforming vehicles way back in 1985. In the cartoon series, Matt Trakker and crew battled Miles Mayhem and his deadly Switchblade, a helicopter that transforms into a jet plane. The ’80s TV show made by Kenner (later acquired by Hasbro) is now being made into a big Hollywood movie with a high-profile director.

F. Gary Gray is a man who knows all about directing high-speed car chases since he was behind the camera for Fate of the Furious and 2003’s Italian Job. Now Gray will be directing the upcoming live-action M.A.S.K. movie for Paramount and that means he will he will get to play with some new toys. Like the Thunderhawk, a red Chevy Camaro that transforms into a gull-winged fighter jet or the Jackhammer, a Ford Bronco that can fire missiles or Condor, a racing motorcycle that transforms into an attack helicopter.

The movie is said that it will have “a contemporary subculture movie with a youth empowerment angle.” Whatever that means. There was no release date provided, but Gray is also directing the upcoming untitled Men In Black spin-off, which is said to star Chris Hemsworth and Tessa Thompson, and has a tentative release date of May 17, 2019.

Once again we see that everything old is new again such as dad shoes, Bill & Ted, Sega Genesis, Matrix phones, and Blair Witch.