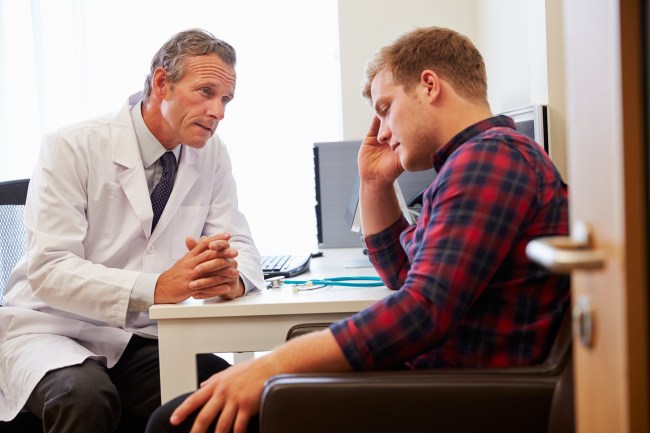 There is no arguing that men are a bit stubborn when it comes to getting checked out by a doctor. Who fucking needs those quacks, am I right? We are infamous for putting on the old tough guy front when we’re not feeling well, and most of us, at the very least, deserve an Academy Award for acting like we don’t give a damn if we are snuffed out by sickness. “We all got to die from something,” some might say.

Although the human body is a master at letting us know when something isn’t quite right, some men will completely ignore the warning signs of impending doom. They could have severe stomach pain for months on end, only to chalk it up to lousy cooking. Their leg might turn yellow from a nasty infection and they’ll just blame it on those cheap goddamned pants they got at Walmart. The inability to get a rock-solid boner, well, that’s someone else’s fault. And that bulging gut that seems to get bigger with each passing day, hey man, that’s just the beer.

At the end of the day, however, men really are not as tough as they are scared shitless about what they might find out if a doctor does, in fact, take a look under the hood. So rather than endure any potential stress and dread, we just ignore our symptoms until the condition either works itself out, or we drop dead.

Meanwhile, we go to the gym to work on our abs, eat fucking Kale salads and Keto our brains out. Some of us have even given up booze in an effort to be healthier and live longer. But we can’t seem to discuss these five significant, life-altering medical concerns with our doctors. What the hell is wrong with us?

Mental Health
Men are taught not to show their emotions are run the risk of being labeled a candy-ass. So we take on a lot without feeling able to discuss all of the fucked up shit that is happening in our lives. There’s financial challenges, death, divorce, loneliness, depression, guilt, regret and countless other unpleasant experiences and feelings that are tough for even the strongest man to contend with. Of course, waking up every morning a rattled mess can take its toll. Some men feel like they are trapped and alone. But there is no shame in talking to a doctor about these problems and trying to find a way to feel better. Maybe medication is the solution. Perhaps you just need a vacation. Either way, the first step to resolving your mental health issues is to speak up and give yourself a break.

Testicular or Prostate Cancer
Hell man, none of us ever want to be faced with cancer of any kind, much less one that starts growing in our balls or up our ass. Good god, what could be more humiliating than getting the rubber glove treatment for that? But these types of cancer are relatively common in our kind, and most of the time they are entirely treatable. The trick is they must be caught in time to increase one’s chances for survival. So, we must be diligent in conducting self-examinations (yes, you have to play with your balls) and always see a doctor when symptoms arise. But it’s embarrassing as fuck. Sure it is. Don’t worry, though, you’re not alone. Getting examined for testicular or prostate cancer is uncomfortable and frightening for every man. But it is senseless to allow one’s body to wither up and die just because we have an aversion to taking off our pants in front of someone we are not romantically involved with. Just shower up, trim those pubes and go for it!

UTI and STD
Not only are these types of afflictions common, but most of the time, they are completely treatable with a round of antibiotics. But we get it: Telling a doctor that it burns when you pee or that your pecker is dripping more than usual is not exactly a conversation that most of us are eager to have. Still, most of the time, these conditions can be diagnosed with a simple urine screen. The doctor may ask you some embarrassing questions, though, like was your last sexual experience with a man or a woman? There might be some instances where the doc also has to get more physical to assess the situation. Back in the day, they used to have to finger your asshole to check for gonorrhea. Or maybe my physician was just a freak. Either way, if you suspect that something isn’t right in your nether region, the best course of action is to get yourself checked out.

Skin Conditions
Some of the roughnecks out there have a tendency to get burned up during the summertime months. For some reason, sunscreen is taboo among the male population. Anyone who has ever worked construction can confirm that there is always someone with such a bad sunburn on his face that you can see the white outline of his glasses. While guys might not think much about the potential for skin cancer, the threat is very real. Around 5,000 men die of skin cancer every year. This mean if some odd discoloration or growth pops up on your body somewhere, it is best to have it examined by a doctor. But before it gets to that point, try putting on some sunscreen.

Sexual Dysfunction
No man wants to admit that his baby-making equipment has stopped working. However, this massive blow to the ego happens to a lot of guys. So, never fear. Sometimes it is just because of stress, but there are times when the limpness stems from a severe medical condition. Nine times out of ten, the problem is nothing to be conserved about. Perhaps a change in diet, exercise and some stress management is all one really needs to get his boner back. But problems getting it up could also be a sign of artery blockage or Type 2 diabetes – neither of which you want to fuck with. Get yourself to a doctor. No one is going to laugh at you because you showed up with a broken wiener. And chances are you’ll be back to making ugly babies in no time.