Behind-The-Scenes Videos Of Michael B. Jordan’s Weapons Training To Play Killmonger In ‘Black Panther’ Are Intense 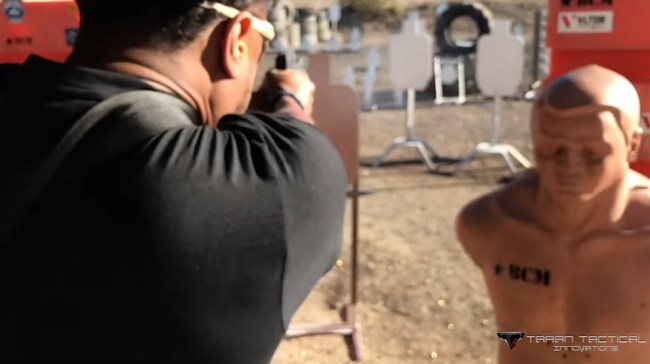 Michael B. Jordan is really good at his job and part of the reason for that is dude always does some of the most intense training and preparation in advance of the roles he plays.

In the past, we have seen how Jordan tortured himself to pack on 24 pounds of muscle to move up a weight class for Creed 2. We’ve also seen the insane process he went through to “scar” his body for Black Panther. He was even willing to get knocked out for real while he was filming the first Creed movie.

Michael B Jordon, "young creed and "getting KO'd for real! But he got up and did it again! That's called guts!! pic.twitter.com/yFo3PVmvhA

Recently, Jordan showed off a little more of the type of training he goes through to prepare for a movie, this time it was how to properly use guns for the role of Erik Killmonger.

As we have seen John Wick’s Keanu Reeves and Halle Berry do in the past, Jordan spent a little time with Taran Tactical learning the finer art of marksmanship with a variety of weapons… and it was intense.

“Since everybody wanna show off let me show what Killmonger can do. 🔫🔫😂 (A lil BTS of me training for Black Panther),” Jordan wrote on Instagram.

The next day Taran Tactical took it a step further, releasing their own 2-and-a-half-minute video of Killmonger in training.

The latest rumors floating around and reported by Entertainment Tonight back in January say that we haven’t seen the last of Jordan playing the misguided Killmonger.

When asked if “everybody” would be coming back for the sequel, [Angela] Bassett replied, “I would assume so.”

[Her husband, actor Courtney B.] Vance quickly cut her off, noting, “Yes, just go ahead and say it, yes! Everyone will be there, including Michael B.”

Michael B. Jordan’s villainous character, Eric Killmonger, seemingly died in the first film, but Bassett, 60, notes, “[We didn’t technically see him] go into the ocean, no.”

You’re damn right Killmonger ain’t dead. After all, this is the same guy who Michael B. Jordan thinks could have taken down Thanos and saved us three-plus hours in the theater.