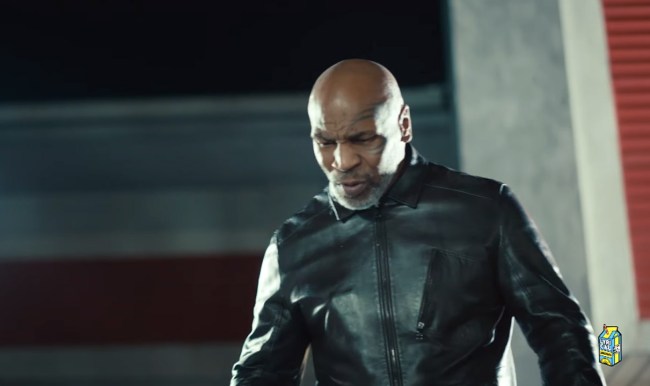 The one time baddest man on the planet, Mike Tyson, made a surprise cameo in Eminem’s new Godzilla music video.

In the video, Tyson showed up out of nowhere, much like all of Eminem’s albums lately, and knocked out the rapper with a devastating sucker punch, then proceeded to apologize profusely when he realized what he had inexplicably done.

“Em, that you?” Tyson says to a prone Eminem on the pavement. “Oh, I didn’t mean it, please, I’m sorry, please forgive me. Fuck!”

Had a good time knocking out @Eminem in his new video. Truly inspiring how you and Dre are still doing big things. Watch the full music video at https://t.co/ra2G1H7UAw #godzillachallenge pic.twitter.com/UlKlTVFLGx

Eminem’s Godzilla music video also features the world’s fastest rap verse, and concludes with a tribute to late rapper Juice WRLD, who appeared on the track, using his own voice as he says, “I hope everybody having a good day. I hope everybody accomplished something significant. Even if you didn’t accomplish anything significant, don’t be discouraged. Just aim to accomplish something significant tomorrow and the next day and so on. If anybody is going through anything, I hope and I pray that you get through it. And just know that you do have the strength to get through whatever the fuck you going through, no matter what it is.”