Mike Tyson Talks ‘Tiger King,’ He Was ‘Foolish’ To Own Tigers, ‘They’ll Kill You By Accident,’ Big Cat People Are ‘Backstabbers’ 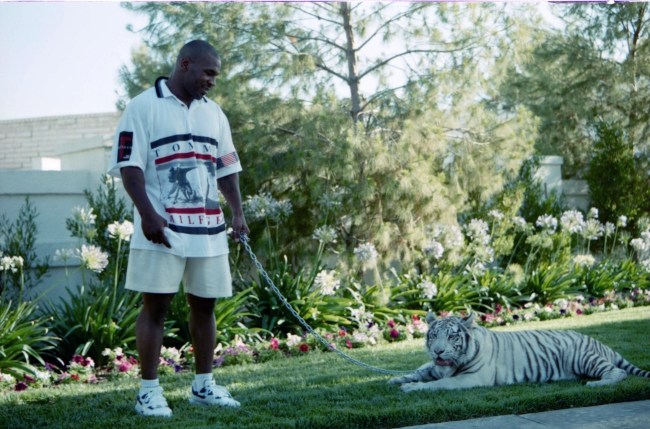 Fat Joe interviewed Mike Tyson, and they talked about Tiger King, the boxer owning big cats, and the night of Tupac’s death.

“That’s just the way those people are. Those people are backstabbing people,” Tyson said of exotic animal breeders. “They just not trustworthy people.”

Tyson talked about the white tigers that he used to have and even sleep in the same room as the beasts. “I had three of them in my house. I had their mother and their father,” Tyson said. He added that they had a baby tiger back in the 90s.

Tyson was on the Joe Rogan Experience last year and explained how he got his hands on a tiger — through a car dealership.

“I’m in prison at the time, and I’m talking to my car dealer,” Tyson told Joe Rogan and Tom Segura. “And he has some cars that belonged to a friend of mine.” Tyson said the car dealership employee said if his friend doesn’t pay for these cars that he’s going to trade these vehicles for exotic animals including cougars, lions, and tigers.

“Imagine how cool that’d be, you’d be in an Aston Martin or Ferrari and have a tiger right next to you,” the car salesperson said. “Wow that would be cool; get me some cubs,” Tyson replied.

Tyson said that he did drive around with his tiger in the car. “Man… they thought I was the illest shit ever in the world!”

Tyson rhetorically asked himself, “What was going through my mind?”

Tyson said that none of his tigers jumped over the fence, but there was one time where a woman scaled the wall on his property. A tiger attacked her, and “there was a bad accident.” The woman tried to sue, but Tyson said they settled, and he paid her $250,000 because “she was just fucked up.”

“You can’t believe what they can do to a person’s flesh,” Tyson said of a tiger’s deadly bite. “Incredibly quick for something that’s 500-600 pounds. They kill you in like three seconds, so you’re not gonna live long.”

“You don’t stand no chance, they kill you with one swing, BOWWWWW, your dead, your neck is broken,” Tyson said of big cats.

RELATED: Mike Tyson Talks About Tupac Visiting Him In Prison, Wanting To Rob Cus D’Amato And Asks Why His Daughter Dates White Guys

The 53-year-old Tyson admitted that he was “wrong” to own tigers at his Las Vegas property back in the day.

“I was foolish. There’s no way you can domesticate these cats 100 percent,” Tyson said. “No way that’s going to happen. They’ll kill you by accident, especially when you’re playing rough with them, you’re punching them back. They get hyped up, hit you back, and you’re dead.”

“I’m just happy I educated myself,” Tyson added. “I was doing the wrong shit. I shouldn’t have had them in my house, believing they were domesticated. I was wrong.”

Tyson’s infamous ownership of tigers was part of the plot in the 2009 movie The Hangover.

The rapper and boxer also talked about the night that Tupac Shakur died after Tyson’s heavyweight fight on the night of September 7, 1996. 2pac was shot after Tyson’s heavyweight fight against Bruce Seldon at the MGM Grand in Las Vegas. Tyson said Tupac’s murder was “planned in advance.” The fight was an “opportunity for something like that could happen. Everybody knew everyone was gonna be there.”

“This is the deal with Tupac, he was just a force, an uncontrolled force, and that was the problem,” Tyson told Fat Joe. “He was powerful, and no one could control him.”

Mike Tyson is still the undisputed most interesting man in the world.