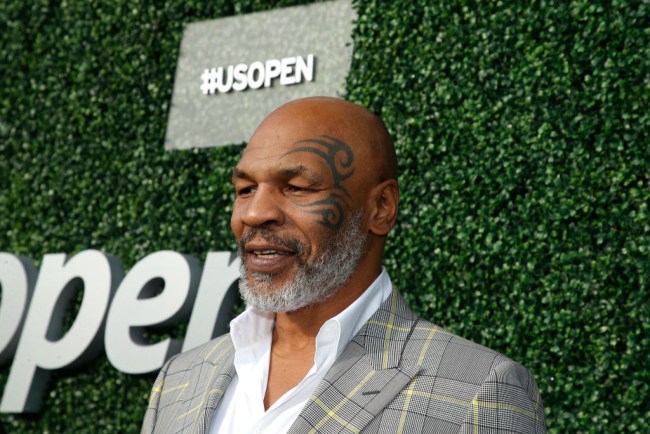 Mike Tyson gave some insight into his life in a new interview with Snoop Dogg. Iron Mike appeared on Snoop Dogg’s GGN – Double G News Network podcast on Wednesday. The legendary heavyweight boxer talked about his favorite rapper of all-time, the toughest opponent he ever faced, and how he almost never made the Mike Tyson Mysteries cartoon.

In the episode titled “Heavyweight Championship Lungs with Mike Tyson and Snoop Dogg,” the boxer and rapper talked about life while they smoked weed.

Mike Tyson said his favorite rapper is Run DMC, but he also mentioned LL Cool J. Tyson had a special bond with LL Cool J because he has fighting in his bloodline. The Rock the Bells rapper comes from a family of prestigious fighters dating back to the 19th century.

Tyson said Muhammad Ali was the greatest fighter he ever saw. When Snoop asked what middleweight fighters Tyson respected, he responded Ray Robinson, Bernard Hopkins, “Roy Jones was a monster,” and “Marvin Hagler was a beast.”

Tyson said Evander Hollyfield was his toughest opponent, because “he’s a badass, he’s a counterpuncher. He’s beautiful in that.”

When asked who was the hardest puncher he ever faced, Tyson debated and answered, “Probably Lennox Lewis. He’s a monster.”

They talked about the UFC, and Tyson said it is “more entertaining” and “they got good knockouts.”

Tyson also told a Tupac Shakur story, where the legendary rapper visited him in prison, which he has told before on T.I.’s ExpediTIously podcast (Listen HERE). “You just knew he was special, he was fearless,” Tyson said of Tupac. “He was smart, he was conscious.”

Tyson explained what it was like to be the “most hunted” during his boxing career after he became the champ.

“You gotta be controlled. Our instincts is the street. If you don’t stay disciplined that’s where we’re gonna go — the streets.”

After getting out of prison for his rape conviction, Tyson said he “was really bitter and angry.” He added, “I wanted everyone to know that I’m still the best.”

Tyson revealed that his mentor Cus D’Amato hired a hypnotist when Tyson was 14-years-old to help him get into a boxing mindset and to funnel his energy for training.

“Life humbles you,” Tyson said in how he changed his behavior since he was a kid.

Tyson revealed that he didn’t want to do Mike Tyson Mysteries at first. Tyson said that one day there were “white guys at his front door,” who he thought were federal agents. Then after seeing a few clips, he said: “Wow, this shit is fly.”

Tyson said one of his lions gave him “eight stitches” after he “bit the shit out of him.” Tyson was giving his lion a tetanus shot because he didn’t have papers for the wild animal and didn’t want anyone to know that he was keeping lions in his home.

Tyson said the first thing he thinks when he wakes up every morning is that he’s “just happy to be alive.”

In a rapid-fire Q&A, Tyson said he prefers burgers over tacos, is an assman before a breastman, his favorite sneakers are New Balance, favorite thing to cook is eggs because that’s all he can cook, favorite cereal of all-time is Cap’n Crunch with the berries.

Tyson was asked how often he thinks about sex a day, and the boxer said, “Listen, at one time in my life that was all I ever thought about. I don’t think about it as much now. I’m not as good as a used to be.”

Asked about the worst job he ever had, Tyson said, “I was in prison, I had to sweep the gym.”

If stranded on a desert island, and could only have three albums, Tyson would select Lauren Hill’s album, Pac and Biggie.

If he could remake and star in any movie, Tyson said he would star as Wesley Snipe’s character Nino Brown in the 1991 film New Jack City.

If Mike Tyson could have any superpower, he would want to be able to read people’s minds.

RELATED: Looking Back At The Time Teddy Atlas Put A Gun To Mike Tyson’s Head