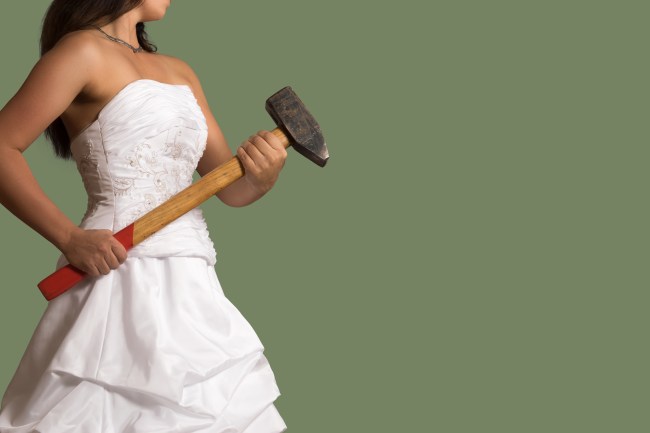 5. Showing up late to the ceremony
4. Failing to give a gift
3. Sticking your dick in the cake
2. Having sex with the bride/groom in the coat room
1. Any woman who’s not the bride wearing white

The most dangerous place on earth is being at a wedding in a white dress if you’re not getting married. It’s the male equivalent of tattooing a swastika on your forehead and walking into a job interview. Make no mistake, on the happiest day of the bride’s life, she won’t hesitate to cut you with the cake knife. Fucking with the bride on her wedding day is the leading cause of woman-on-woman crime in America, according to a recent study that I just pulled out of my ass.

A woman named Amy Pennza will need to reconcile with what her mother-in-law did at her 2004 until the end of time. Terri not only wore white, but she wore a goddamn wedding dress

My mother-in-law wore a wedding dress to my wedding. So, yeah, top that one, Twitter. #weddingfail @jimmyfallon pic.twitter.com/IjqvnXT6Ps

“I got ready at the church in this little room, and it’s almost burned in my memory,” Amy Pennza, 40, recalling her 2004 nuptials, tells The Post. “The door opens, she walks in, she’s lit by sunlight behind her and she looks like an angel. Only not.” 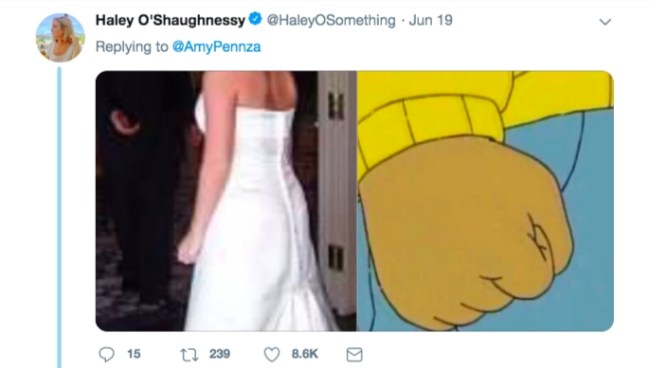 “It’s flabbergasting to me that she wore that but it just didn’t come from a place of malice — she’s a huge thrift person, so she saw it on clearance and just bought it. She maintains that she just didn’t think about it.”

LIES. There is not one goddamn person who, when seeing her in that dress, wouldn’t be like “Yo, a wedding dress on not your wedding. Bold choice, Cotton.”

Luckily for Terri, she didn’t reprimanded. Other brides weren’t so forgiving. 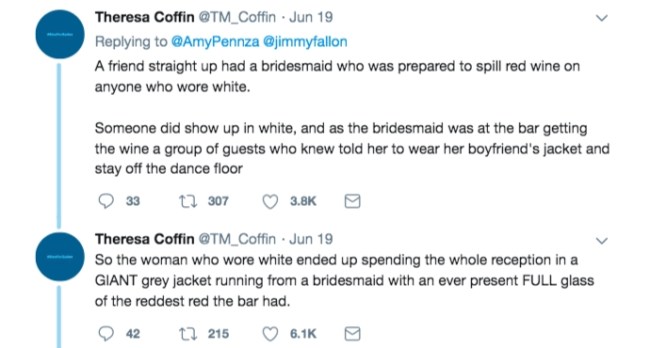 Can’t wait to pull my dick out at my brother’s wedding and feign ignorance!