NASA Is Sending Some Wild Robots, Including A Shapeshifter, Into Outer Space To Look For Life On Other Planets 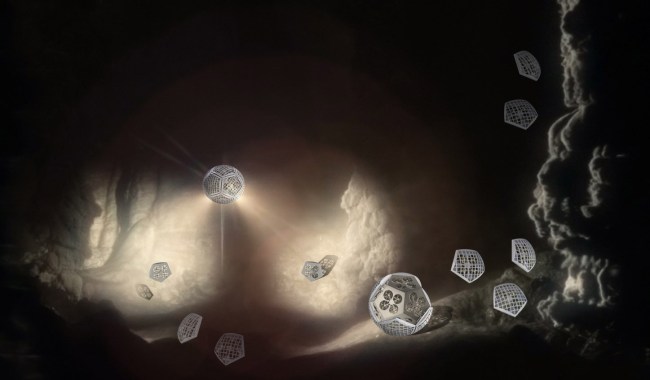 NASA’s Limbed Excursion Mechanical Utility Robot (LEMUR) can autonomously walk, climb, and crawl, and now other robots using its technology, are going to be, or have already been, sent into space.

Among these robots are the RoboSimian, Robonaut 2, Ice Worm, Underwater Gripper, Dragonfly, and Astrobee, and the wall-climbing LEMUR is the source of many of the skills that are going to really freak the hell out of those aliens who live on Mars.

The LEMUR, with its four limbs and hundreds of tiny fishhooks in each of its 16 fingers (yes, 16) and top of the line artificial intelligence, recently scaled a steep rock wall in Death Valley while at the same time keeping an artificial eye out for ancient fossils to simulate a mission of searching for signs of life on Mars.

That’s a little unnerving. However, the most creepy of all of these NASA space robots might just be the Ice Worm.

According to Astrobiology Magazine…

Adapted from a single limb of LEMUR, Ice Worm moves by scrunching and extending its joints like an inchworm. The robot climbs ice walls by drilling one end at a time into the hard surface. It can use the same technique to stabilize itself while taking scientific samples, even on a precipice. The robot also has LEMUR’s AI, enabling it to navigate by learning from past mistakes. To hone its technical skills, JPL project lead Aaron Parness tests Ice Worm on glaciers in Antarctica and ice caves on Mount St. Helens so that it can one day contribute to science on Earth and more distant worlds: Ice Worm is part of a generation of projects being developed to explore the icy moons of Saturn and Jupiter, which may have oceans under their frozen crusts.

Speaking of Saturn, NASA recently announced that they are developing shapeshifting robots (pictured at the top of the page) that will study Saturn’s very important moon Titan.

In a dusty robotics yard at NASA’s Jet Propulsion Laboratory in Pasadena, California, the Shapeshifter team is testing a 3D-printed prototype of this unusual explorer. A contraption that looks like a drone encased in an elongated hamster wheel rolls across the yard, then splits in half. Once separated, the two halves rise on small propellers, effectively becoming flying drones for aerial exploration. These 3D-printed parts are only the beginning; the team imagines a series of up to 12 robots that could transform into a swimming probe or a team of cave explorers.

The Shapeshifter will have to wait its turn to go into outer space though. Next up for a mission to Titan will be the Dragonfly in 2026.

Check out even more of the NASA robots that will be our eyes and ears… and hands, and legs, and brains… in space today and in the coming years below.