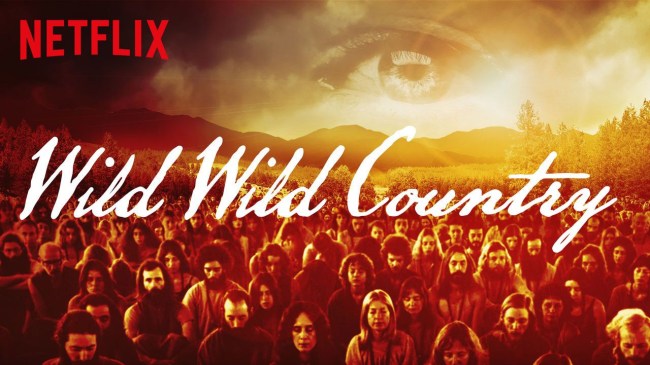 A new Netflix documentary series called Wild Wild West about the controversial Rajneesh Movement of the 1980s has viewers hooked and binge-watching it like crazy.

Released by Netflix on March 16th, Wild Wild Country covers the world’s most controversial guru at the time named Rajneesh (or Osho, Acharya Rajneesh, Bhagwan Shree Rajneesh or Bhagwan, depending on what day it was), who built a utopian city known as Rajneeshpuram for his cult of “Orange People” in Wasco County, Oregon in 1981.

This, according to the description of the story on Rotten Tomatoes, where the documentary series currently sits at 100%, led to, not-very-shockingly, “a massive conflict with local ranchers ensues; producing the first bioterror attack in US history, the largest case of illegal wiretapping ever recorded, and the world’s biggest collection of Rolls-Royce automobiles.”

Not to spoil anything for you, and this really won’t, it will just make you want to watch it even more, Wikipedia states, “In 1985, following the investigation of serious crimes including the 1984 Rajneeshee bioterror attack, and an assassination plot to murder US Attorney Charles H. Turner, Rajneesh alleged that his personal secretary Ma Anand Sheela and her close supporters had been responsible. He was later deported from the United States in accordance with an Alford plea bargain. After his deportation, 21 countries denied him entry and he ultimately returned to India, and a revived Pune ashram, where he died in 1990.”

Uh, yeah, no wonder people are binge-watching the crap out of Wild Wild West.

OMG!
This is insane and so good!

Ignore the “sex cult” talk around #WildWildCountry because any prudish American reviewer focusing on that aspect missed out on one of the greatest American documentaries ever created. Just strap in for the ride. Babeeee 🇺🇸😎🇺🇸

Wild wild country is a masterpiece

My god! #WildWildCountry on @netflix is one of the best documentaries I've ever seen. It is an amazing story about a religious group (labeled a Cult) moving from India to a small town in USA thinking that the constitution would protect their rights. Boy were they wrong! #Riveting

One thing that's interesting about #WildWildCountry is that, depending on who you are, you could be watching a completely different documentary.

Well, that’s good enough for me. Check out the trailer below and then go watch it here.