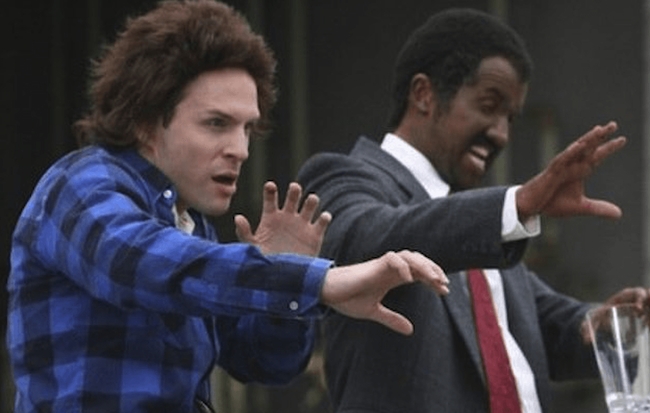 While It’s Always Sunny flew so far under the radar during its first season that it narrowly avoided crashing into a small hill after all of the episodes aired, it got a major boost when Danny DeVito was added to the cast the following year. This—combined with the brilliance of the show itself—made the sitcom a bit harder to ignore and it was only a matter of time until it started to get the attention it deserved.

In 2008, a television critic for The Philadelphia Inquirer reviewed the show’s fourth season and coined the oft-repeated describer “Seinfeld on crack” to sum up its general essence. It’s certainly not the worst comparison in the world, as Jerry and Co. were not exactly good people, but with that said, they didn’t have a total lack of a moral compass (or the luxury of being on cable) that makes every member of The Gang the truly despicable asshole we all know and love.

The beauty of having a show that centers around a bunch of repugnant human beings is that you can get away with putting some impressively politically incorrect words and thoughts into their mouths and heads. Yes, they may be offensive, but the underlying theme of the entire show is that you have to be an awful person to do and say the things The Gang does.

However, it appears someone at Netflix may not have gotten that memo, as MovieWeb reports viewers in the United Kingdom who were in the mood to tune into the spectacular “Dee Reynolds: Shaping America’s Youth” over the weekend found it mysteriously missing from the platform (thankfully, it’s still on Hulu in the United States).

If you need a quick refresher, the ninth episode of the sixth season features Dee stepping into the role of a substitute teacher for a high school drama class, Charlie getting a job as a janitor at the same school and taking a Juggalo under his wing, and Dennis and Mac working on Lethal Weapon 5, where the former steps into Mel Gibson’s role with the help of a terrible Australian accent and the latter channels his inner and outer Danny Glover with an assist from some very questionable blackface.

The two of them refer to Laurence Olivier’s performance in Othello while debating whether or not their blackface has artistic merit, and much like Tropic Thunder, it’s incredibly obvious that the whole point here is to highlight that there is literally no justification for harnessing the makeup in a homemade Lethal Weapon movie. Additionally, anyone who’s seen it knows it doesn’t even come close to being as offensive as Danny DeVito’s sweaty, naked body in a sex scene that lasts for an uncomfortable amount of time.

The renewed focus on racial issues around the globe in recent weeks has resulted in a number of platforms targeting potentially offensive content, as HBO Max temporarily scrubbed Gone With the Wind and Netflix also pulled Little Britain due to blackface concerns.

The strangest part here is that season nine’s “The Gang Makes Lethal Weapon 6″ somehow managed to avoid befalling the same fate despite being just as “distasteful.” C’mon, Netflix. If you’re going to get your panties in a bundle, it can’t be the pair with a racy saying or an arrow pointing down at your crotch.

Here’s to hoping reason will prevail.