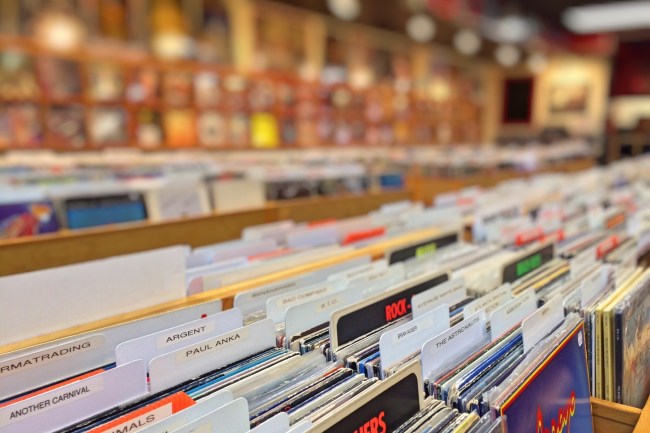 Welcome to the BroBible New Music Round-Up, where we see what new music has been released this week. In the spirit of Thanksgiving, we are thankful for Anderson .Paak’s album ‘Oxnard,’ because the album is better than the plate of leftovers your aunt gave you as you were leaving. Follow me @ryanoconnell79

Weezer are officially dropping another self-titled album that will forever be known by the color of the album cover. “Black Album,” set to be released in March, will join the ranks of 1994’s “Blue Album,” 2001’s “Green Album,” 2008’s “Red Album” and 2016’s “White Album.” If, besides the color thing, something strikes you as a theme with those albums, it’s because besides Pinkerton, they are all also the good Weezer albums.

Earlier this week Weezer shared the second song from “Black Album.” “Zombie Bastards” has a similar vibe to the previously released “Can’t Knock the Hustle,” with both giving me a vibe of eh, I’m not sure about this.

You say potato, I say potahtoe. You say Dipset, I say the Diplomats. They can’t agree on a name, so neither can we here at the New Music Round-Up. On the one hand, Dipset sounds like another Diplo-produced joint, whereas the Diplomats sounds like a 1950’s doo-wop group. Whatever, we’ll go with Dipset and get on with our lives.

Moving on, Dipset are back! It’s been 15 years, but the crew of Harlem rap legends (Cam’ron, Jim Jones, Juelz Santana and Freekey Zekey) are back with their first album since 2004’s Diplomatic Immunity 2. In the years since there has been internal beefing, getting signed to Interscope, getting dropped by Interscope and multiple group members serving time in prison. But the past is the past and now Diplomatic Ties is out and the original members are out on the road in support.

On top of that, a documentary about the group is slated to come out in early December. Will it clear up this whole Dipset or the Diplomats confusion? One can only hope.

It’s been six years since Rita Ora released her debut album, Ora, and now she’s back for round two with Phoenix. Ora has been busy during those six years, appearing on other people’s tunes and dropping the occasional single, a few of which appear on Phoenix. Ora made noise earlier this year with the release of her song “Girls,” featuring Cardi B, Bebe Rexha and Charli XCX. The song touched on themes of bisexuality and while some received it positively, some didn’t, saying that the song contained “problematic undertones and queer stereotypes perpetuated by the lyrics.” Ora apologized, saying that her own experiences with bisexuality influenced the song.

Controversy, as well as a general inability to lip synch on national television aside, Ora is hoping this album gets her some of the commercial success that has so far alluded her, especially on this side of the Atlantic. Phoenix features collaborations with Liam Payne, Rudimental and Avicii, who died last April.

First off, what is Record Store Day? Quite simply it is a day meant to celebrate the local, independent music stores that anyone over the age of 25 grew up going to. You may have noticed that such stores are becoming harder and harder to find, which is a damn shame. There are few joys more pure in life than strolling through the cramped aisles of small music store and discovering new music.

Record Store Day officially became a thing in 2008 when the first Record Store Day occurred on April 19, 2008. The following year, Jesse “Boots Electric” Hughes of Eagles of Death Metal created the title of Record Store Day Ambassador, naming himself the first ever holder of the title. Since then the honor has been bestowed upon Josh Homme of Queens of the Stone Age, Ozzy Osbourne, Iggy Pop, Jack White, Chuck D, Dave Grohl, all of Metallica, and St. Vincent.

As the years have gone by, Record Store Day has become an opportunity for artists to release special editions of their classic albums, collections of rarities, live albums that had previously only been urban myths and new singles. This year, Record Store Day is getting in on the Black Friday action. For a full list of what is being released and what stores are participating, check out the RSD website.

Here are just a handful of what is being released today.

Rage Against the Machine Live & Rare

The first live album released by Rage was originally only available in Japan, where it was released in June of 1998. It includes a version of “Bullet in the Head” from a 1993 show in Amsterdam, “Bombtrack” from another 1993 show, this one in Minneapolis, and “Freedom” from a show in Vancouver. It also features the band’s cover of N.W.A.’s “Fuck tha Police” from a show in Washington D.C. in 1995. Act quickly though. Only 5,000 copies are being made available.

A year after celebrating it’s 10th anniversary, the sixth and final album from Jack and Meg White is being released on vinyl. A deluxe version of the album was released last year so if you’re like, really, into the White Stripes, that might be your jam. But if you’re like, a little into the band, this sounds like a better option for you.

Slip Stitch & Pass is Phish’s second live album and the material is pulled from a 1997 show in Germany. The vinyl version of the album was going to be available at this summer’s Curveball, but you know, shit happens. Now it’s available on Record Store Day. You know where Slip Stitch & Pass isn’t available? Spotify. I learned that yesterday, which is a bummer because since then I’ve really wanted to listen to “Cities”>”Wolfman’s Brother.” Life just isn’t fair.

Is Remain in Light the best Talking Heads album? Hard to say, kids. But it does feature “Crosseyed and Painless,” as well as “One in a Lifetime.” So you know, maybe?

Either way, only 5,500 copies of this release are being made. Talk about “Once in a Lifetime,” am I right?

Everyone in college had a buddy who was into Zappa. I had Joe. That dude loved Zappa. Me? I could never really get into him. File under: I like that you like them.

A Record Store Day exclusive, it’s the second time Cheap Trick have dug into the vaults to put together a special release for RSD. This one includes live tracks, rarities and demo versions. It does not feature “I Want You to Want Me” or “Surrender,” but if you dig Cheap Trick, that in no way should stop you from wanting to get your hands on this.

This summer, Guns N’ Roses released a massive box set that was a merciless deep dive into their debut album Appetite for Destruction. Included was “Shadow of Your Love,” an effin’ monster truck of a B-Side. Now it’s available as a 7 inch, giving you one more way to blast the living shit out of this song. Do it. Don’t even think twice about it. Your significant other, your parents, your roommate, your landlord – they will all understand.*

*Hopefully. I make no promises.

Ferg’s Record Store Day exclusive is highlighted by two versions of his song “Plain Jane,” the second of which is a remix featuring Nicki Minaj. I’ll probably never forgive Ferg for making me spend the bulk of 2013 walking around mumbling “shabba ranks, sha-sha, shabba ranks,” but hey, time heals all wounds.

Originally released thirty years ago, the live album from Garcia and company has since gone out of print. But the music industry loves celebrating anniversaries, so Almost Acoustic is back and it’s back in a variety of different forms. However, the vinyl package, which includes two green and black marbled records that are individually numbered, are limited to only 5,000 copies. The album features tunes recorded in 1987 at shows in Los Angeles and San Francisco and feature versions of “Swing Low, Sweet Chariot,” as well as the Dead classic “Ripple.”

Again, for a full list of EVERYTHING that is being released on Record Store Day: Black Friday Edition, go HERE. And for a video of Will Ferrell heckling himself, go HERE.

Khruangbin is a three-piece band from Houston, who, according to their bio, are heavily influenced by Thai funk from the 1960’s, something that until writing that sentence I sincerely did not know was a thing. Their name apparently translates to “engine fly” in Thai. So there’s that.

But there’s also this sweet, little version of “Christmas Time Is Here” that couldn’t be better suited for a low key Christmas party or the casual sipping of a delicious cocktail while lovingly admiring your recently decorated Christmas tree. The band recently released the track as a 7 inch and are in the middle of a North American tour, where they recently opened up for Leon Bridges.

Speaking of a 7 inch…

While going through the slate of Record Store Day releases, I found myself wondering what exactly was the difference between a 7 inch and a 12 inch. You may not be wondering that, but in case you are, I am here to clear up any confusion.

A 7 inch is limited in capacity, capable of holding about 4.5 minutes per side, hence 7 inchs also being known as 45’s.

A 12 inch is for the most part, your standard issue sized LP. Where things get specific is when it comes down to how it was cut; whether it was cut at 33 rpm or 45 rpm. That would then determine how much is able to fit on a side.

Cool. Glad we got that cleared up.

This Week in It’s Funny Because It’s True

lead singers at dads leaving a
a concert restaurant

“you guys ready to rock and roll?”

Hope everyone had a good Thanksgiving.