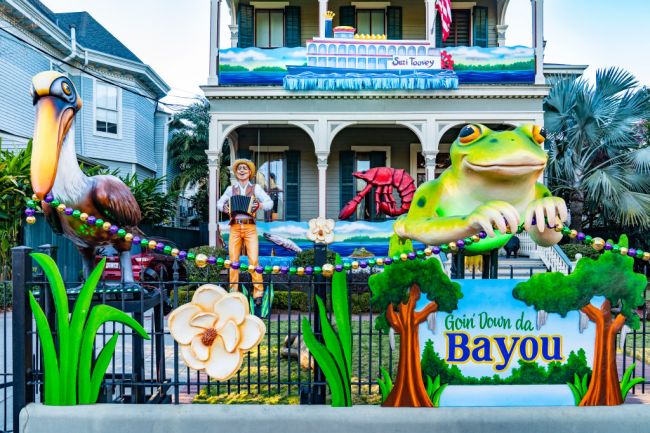 Mardi Gras looks different this year, defined by a pandemic. As the COVID-19 global pandemic continues to keep large crowds from gathering, New Orleans bars are closed and parades are cancelled for the Fat Tuesday celebration. During a time when the city is typically packed with over a million Hurricane and Hand Grenade-fueled visitors, the French Quarter is reserved for locals, Bourbon Street is eerily empty and parade routes are just streets.

The season of Carnival is subdued, but that didn’t keep the Big Easy from going all out. New Orleanians live year-round for the two weeks prior to Lent and they’ve adapted to the times. Instead of elaborate parade floats and more than 100,000 pounds of beads, residents are transforming their homes into masterpieces. They’re calling them “House Floats” as they celebrate “Yardi Gras,” a yard-focused take on the holiday. The artists who typically design and decorate the floats, which can take up to a year to execute, have pivoted their direction toward making the city feel as “normal” as they can.

When New Orleans canceled Mardi Gras parades to prevent large crowds from gathering, artists like René Píerre and other celebrants decided to display the color and verve of the city’s signature holiday in front of people’s houses instead. https://t.co/wCxBcDYv4y pic.twitter.com/rUEblK440Y

House Floats started popping up around the Crescent City in late January and it has taken off since. Whether they are decorated by the professionals or done by hand, the results have been incredible. As it would be in a normal year, the city is draped in purple, green and gold, alongside some pretty impressive all-out displays.

With Mardi Gras cancelled, New Orleanians are transforming their homes into house floats. They call it #YardiGras. Innovative, but I'll miss the real deal. pic.twitter.com/uY8sUw4gUY

Happy #LundiGras! Here are just a few of the house floats, from all over New Orleans, that professional artists and residents designed and installed to celebrate this unusual Mardi Gras. See more at https://t.co/J8BZOdmhpB. pic.twitter.com/BXBLHj3PYC

Happy Lundi Gras to everyone! Today, The BIA is sharing two House Floats in our community by Kim D. & Barbara G. Kim D. stated “Mardi Gras: Past, Present, and Future fit into our neighborhood theme of Staycation. Barbara G. said, “Our theme is Margaritaville in Nola." pic.twitter.com/DjFJbMpwar

You've got to love New Orleanians… Cancel Mardi Gras Parades… No Problem, House Floats to the rescue…Tomorrow is Mardi Gras so the people in NOLA are celebrating Yardi Gras. pic.twitter.com/YzCvVLnayR

No Mardi Gras floats? Turn your house into one. Here’s one with Pop, Big Al, Uganda and DJ Midnight Creeper/Brother Jes. pic.twitter.com/f54FTGm0Uk

This house had 3 beautiful paintings, all of New Orleans music. It doesn’t seem to be on the @HouseFloats but maybe one of y’all will know who the artist is. Find it on Laurel St. #YardiGras pic.twitter.com/6Vfsq2cE6k

Yeah, this year, Mardi Gras is different. But it’s still magical. We’ve got some gorgeous and creative House Floats to check out in our Uptown neighborhood! Catch some this weekend, Wolf Pack! 💜💚💛 pic.twitter.com/XKvd7xrnTO

I SPEAK FOR THE TREES 🌳 I posted this last week but I love this Lorax house float so much. #YardiGras pic.twitter.com/0Krxi5xfhh

So many house floats, so little time! Can’t believe Mardi Gras is a week away, y’all! 💜🌹💚🌹💛 #NewOrleans #OnlyLouisiana #YardiGras pic.twitter.com/tofB77cY28

No Mardi Gras parades in NOLA this year, but people are doing house floats! Decorating their houses and hiring some float 🤩 pic.twitter.com/xoFHRkVyk1

I present amateur made Chicago Blues house float. We were happy with how it looked, at least before the rain and wind shred it all up. Happy Mardi Gras season! pic.twitter.com/oko4nrjoGm

Little Shop of 2020 Horrors. This is what I went to see. I found it right away and it did not disappoint. #YardiGras pic.twitter.com/z09KkQsIp6

Mardi Gras parades got canceled by Covid-19. So people in New Orleans turned their houses into floats. Some 3,000 homes across New Orleans and its suburbs — even some as far away as Luxembourg — are dolled up for the inaugural Krewe of House Floats.
… pic.twitter.com/h53AYVM1Jt

House decorated for this year’s Mardi Gras in New Orleans. No floats this year. Photo by RYAN HODGSON-RIGSBEE
Half a block from a giant mural of the late, great Dr. John, “The Night Tripper,” anchored by a skull by Lisa Browning, illuminates Toledano Street.

My friend, Mary, lives in New Orleans. With Mardi Gras cancelled, the residents are doing house floats. This is hers. All paper mache, all hand made. Gorgeous! pic.twitter.com/bzbRL5zVdZ

Most of the traditional Mardi Gras activities in New Orleans are canceled—but locals have kept the spirit of Carnival alive by decorating hundreds of houses in the style of Mardi Gras floats. Images of "Yardi Gras," via @TheAtlPhoto: https://t.co/usLt6zttgK pic.twitter.com/gYJBE35iWV

Alice in Wonderland 🫖 Finally got a photo with the gate closed! Find it on Louisiana near Magazine. #YardiGras pic.twitter.com/bZLWeiBUFD

Since Mardi Gras parades are cancelled, we are making house floats to still enjoy Carnival season. I chose sunshine and sky colors and flowers to honor JHope for his birthday. Will keep adding flowers and decorations, but here it is so far. @BTS_twt #JHOPE pic.twitter.com/aoVAdv14F3

Music, food and culture are the things that New Orleans does best, and its doing an amazing job of keeping the spirit alive during the holiday. Laissez les bons temps rouler!