NJ Gym Owner Who’s Racked Up $1.2 Million In Fines For Refusing To Close Raises Hundreds Of Thousands For Defense Fund 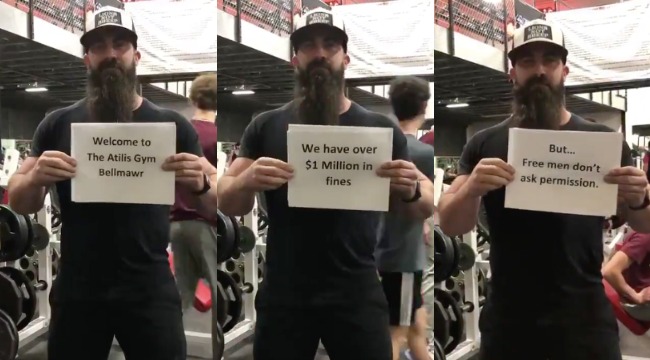 In today’s installment of America Is Just One Long Episode Of Real Housewives, the nation bickers over the right to get swole and vehicular manslaughter! You cannot look away. You are powerless.

Here’s the skinny: An anti-mask gym owner in New Jersey continues to defy state orders to shut down despite racking up $1.2 million in fines.

Ian Smith, owner of Atilis Gym in Bellmawr, made waves over the weekend after being filmed inside of his packed gym delivering a message in the vein of Love Actually detailing the gym’s stance on the state of New Jersey’s mandate to shut down.

Anti-masker in New Jersey refuses to enforce COVID guidelines at his gym pic.twitter.com/zu69lCsvQq

The gym has had its business license stripped and its owners are being fined $15,497.76 for every day they’re in operation (totaling $1.2 million), despite claiming to not have a single infection linked to the gym after more than 83,000 visits during that span. A GoFundMe to pay the gym’s legal fees has currently raised over $350,000 from 7,600 donors.

A post shared by The Atilis Gym Bellmawr (@atilisgymbellmawr)

In a video sent to TMZ, Smith called the damage to small businesses a “complete tragedy.”

“You are putting people out of business for good. You are making them reliant on big government. You are taking away their civil liberties under the guise of pretending like you care about public health.”

The gym does not mandate that its patrons wear masks and thinks the science does not support their effectiveness.

In the wake of Smith going viral, the internet dug up a criminal incident from his past, including killing a 19-year-old Kevin Ade after running a stop sign while driving drunk in 2007. Smith was found to be in possession of marijuana and hypodermic needles and pled guilty to second-degree vehicular homicide. He was sentenced to over 5 years in prison.

“It’s something that I accept full responsibility for. And to anyone out there who hates me, you are completely justified in doing so, but I do want to set the details straight,” Smith said in the video.

Beth Henchy, the victim’s aunt and a radiology technician at a South Jersey hospital, had this to say about Smith’s defiance.

“I used to drive in my car and say, ‘I forgive. I forgive Ian Smith,’ hoping if I said it, I would feel it,” she said in an interview Wednesday. “And then I look at this and… I’m angry again.”

“Maybe he should come hang out with me and my coworkers” dealing with COVID-19 patients, she said. “As we’re holding someone’s hand as they take their dying breath.”

“It shows he has no regard for the law,” Robret said. “He drove drunk, killed somebody, gets probably one of the lightest sentences I’ve ever seen and now 13 years later, you’re out defying the law once again.”

What a sad state of affairs. Hug your loved ones, folks.