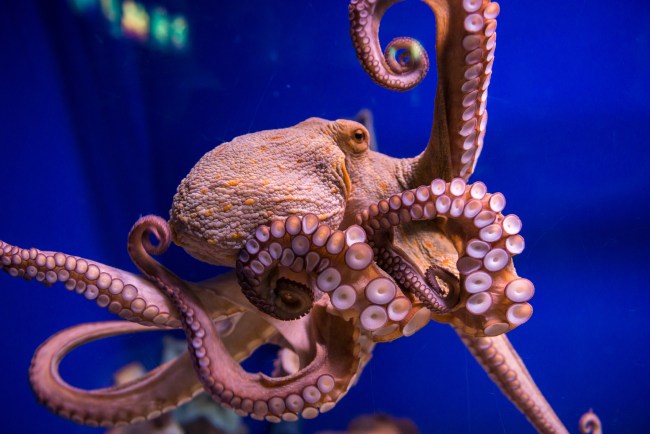 I’ve always believed that octopuses are some of the most peculiar creatures on planet earth. They’re capable of escaping tiny spaces, crawling on land, changing colors and disguising themselves in an instant. They possess a collection of traits unlike anything we see in other species and for that reason, it’s occasionally discussed that they’re actually aliens.

A recent paper published in the journal Progress in Biophysics and Molecular Biology by 33 respected scientists from reputable institutions on the theory of panspermia puts for the idea that octopuses are potentially aliens who were brought to earth as some sort of lifeform flying on a massive life-sustaining comet. The theory of panspermia is a wild one. According to the dictionary, Panspermia is “the theory that life on the earth originated from microorganisms or chemical precursors of life present in outer space and able to initiate life on reaching a suitable environment.” The idea being that tiny life forms could be passed from rock to rock until landing on a habitable place like earth and then explode into a billion different creatures over time.

“It takes little imagination to consider that the pre-Cambrian mass extinction event(s) was correlated with the impact of a giant life-bearing comet (or comets), and the subsequent seeding of Earth with new cosmic-derived cellular organisms and viral genes,” the authors wrote.
In the case of octopuses, the authors think cryopreserved eggs could have hitched a ride to Earth on icy bolides. “Indeed,” they wrote, “This principle applies to the sudden appearance in the fossil record of pretty well all major life forms.” Tiny multicellular critters in the form of “eggs, embryos and seeds” might have sprung to life on Earth after a voyage through space. (via Newsweek)

This isn’t the first time on BroBible that I’ve written about octopuses being aliens and I’m sure it won’t be the last. And, while this paper was published by a group of reputable scientists it’s not exactly being accepted overnight by the scientific community. For more on that, you can click here to read the original article on Newsweek.