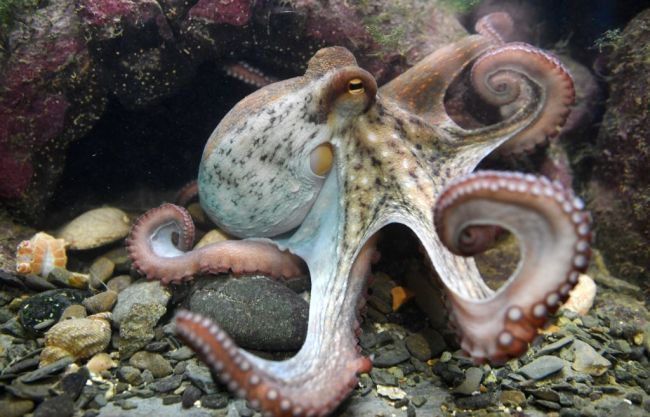 Marine biologists observed sucker-punching cephalopods using their appendages to smack fish around. Several octopuses in the Red Sea and elsewhere were caught on film being bullies, smacking fish as they swam by.

“Researchers recorded eight octopus-on-fish fight videos between 2018 and 2019 in the Red Sea involving a diversity of victims, including squirrelfish, blacktip, lyretail, groupers, yellow-saddle and goatfishes,” according to the New York Post. Good to see that octopuses don’t discriminate in who they attack.

Octopuses and fish hunt in the same areas, so the scientists theorize that the cephalopods attempt to intimidate the fish by slapping the crap out of them. Alpha octopuses want to assert their dominance over pesky fish so they can snatch the prey first. Researchers also believe the violent outbursts could be “spiteful behavior” or a form of “punishment.” Or what if the fish are disrespectful and shouting, “Suck it octopussies!”

The punchy discovery was outlined in a paper titled “Octopuses punch fishes during collaborative interspecific hunting events” that was published by the Ecological Society of America (ESA). Eduardo Sampaio, a researcher at the Marine and Environmental Sciences Centre in Lisbon, shared the exciting discovery on Twitter.

Octopuses and fishes are known to hunt together, taking advantage of the other's morphology and hunting strategy. Since multiple partners join, this creates a complex network where investment and pay-off can be unbalanced, giving rise to partner control mechanisms. @SimonGingins pic.twitter.com/MEyyaIZaxO

After this naturalistic description, to disentangle between potential ecological/game theory scenarios underpinning this behavior's expression, and measure features of collective behavior in multi-species groups, we're now running quantitative analyses on "the gang"! 🐟🐙🐟 pic.twitter.com/QJNsLZdqcK

“You can see there some punches are almost like a small boop,” Sampaio told NPR. “And the other ones that even the whole arm curls up and uncurls afterwards, you know, like the motion of a boxer doing a punch.”

The internet had questions about the punch-drunk cephalopods after Blink-182 member Mark Hoppus tweeted out the study. Most were #TeamOctopus.

I mean, how do scientists know the octopus didn’t have an excellent reason.

Octopi are the coolest freaking animals even if they get grumpy. Remember the octopus that would let himself out of his cage, climb through the vent, open the clam cage, eat a few, close it, and return to his room like nothing happened? And they have 9 brains and 3 hearts!

Then the internet did its thing and made octopus memes.

Luckily for the fish, the octopuses don’t have eight guns or even more dangerous – eight Twisted Tea cans.

All these twisted tea memes and then we find out octopus punch fish for fun all I can think about is the damage an octopus would do with 8 tea’s pic.twitter.com/NXwgue1F1R

I’m not even sure why this study was necessary, we’ve known about the violent side of octopuses for years.