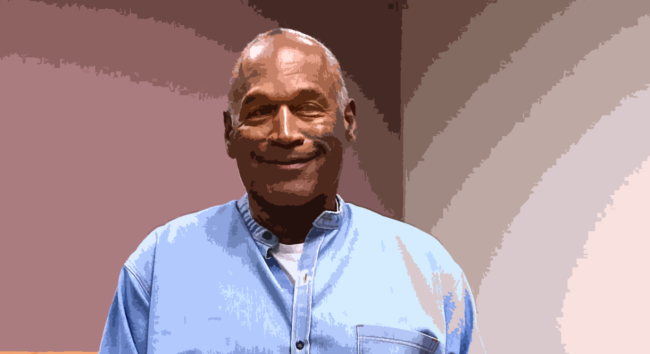 O.J. Simpson, perhaps the only famous person on planet Earth who is less self-aware than Alex Rodriguez, is back in the news again.

The reason for that is because, while he continues his ongoing search for the real killer of his ex-wife Nicole Brown Simpson and her friend Ron Goldman, Ron’s family wants to know why The Juice, as of February 2021, still has only paid them $132,000 of the reported $70 million he reportedly owes them.

Simpson, who recently wondered aloud how many people wouldn’t like to live his life, said, “I don’t work. I play golf four or five days a week. I go out to dinner a couple of nights with friends. People want to buy me drinks. I’m always taking pictures with people. Ladies hug me. People truly care for me.”

Fred Goldman’s lawyers would like to know how it is that the 74-year-old Simpson is able to live such a lush life yet cannot pay the debt he owes the Goldman family.

So, O.J. Simpson has been ordered by a judge to meet with Goldman’s attorneys to answer a few questions about his finances and assets.

It’s all in new court docs, obtained by TMZ Sports, which show a Nevada judge has ordered Simpson to meet with Fred’s attorneys to discuss the ex-Heisman Trophy winner’s employment, property and funds.

The docs show Simpson is required to appear at the lawyers’ offices on Sept. 16 … and if he blows it off, a bench warrant for his arrest could be issued.

Let’s just hope for Simpson’s sake that the meeting won’t take place in Los Angeles. We know how much The Juice fears running into the “real” killer of his ex-wife and her friend.

“I had one suspect I told my lawyers to look at,” O.J. said earlier this month. “I still think he might be involved, but I can’t talk about it.”

Whatever you say, Juice.

Simpson, according to Ruby Wax, who interviewed him in 1998, once called her to joke about killing Nicole for April Fools and pretended to stab her with a banana after she opened her hotel door to him, probably has the same suspect in mind that everyone else does.

OJ was a great RB at USC. He murdered defenses with his slashing and cutting ability. He left em on the ground bloodied and broken. What he did to opposing defenses was a crime.

How does this man have any friends. Seriously. He almost cut the head of the mother of his children's head off. How can people reconcile with that. Seriously.

Are you still looking for the person who murdered Ron and Nicole?