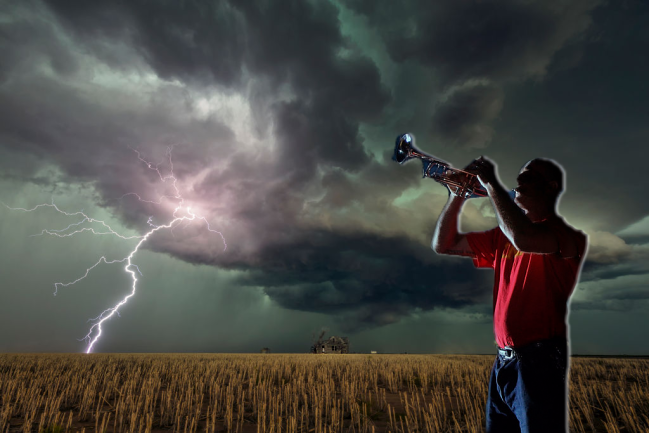 Severe storms rolled through central Oklahoma on late Tuesday night. Wind, hail and flooding left widespread damage across the state and made for a turbulent October night and early morning.

At least three twisters touched down across the Sooner state and the National Weather Service has confirmed 12 tornadoes already this month with several others under investigation. Tornadoes in Oklahoma are extremely common in the spring, particularly in April and May.

However, this year, October’s severe weather has been unusual. This month will likely register as the second most tornadoes in state history for October.

Oklahoma City reporter Dillon Richards of ABC 5 KOCO News went out to asses the damage on Wednesday morning. He stumbled across a man named Ray Payne who might be the most Oklahoma man of all-time.

Wearing a literal blue-collared shirt and denim jeans, the white-bearded man gave a demonstration of what he would do if the tornado sirens were ever to fail.

He would shout, “NEIGHBORS! BEWARE!” before putting his bugle to his lips and playing his own version of the warning sound.

This man says if his neighborhood tornado sirens ever don’t go off, he’s got it covered pic.twitter.com/fRCKx4MZdd

Payne’s approach to saving his neighbors’ lives may actually be effective. His bugle call would certainly get their attention.

Now, there are a few remaining questions:

If the tornado sirens fail, how will Payne know of the tornado? Does it have to be close enough for him to see it through his own eyes?

Should Payne really be running outside to play the horn for his neighbors if it is that close? Won’t they know at that point?

Regardless of the answer to any of those questions, Payne is a man of the people. If you are not fortunate enough to have him in your neighborhood, you better hope that your tornado sirens don’t fail.