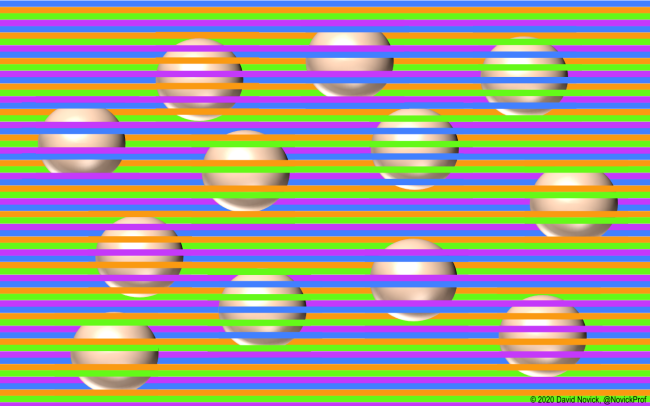 Remember “The Dress”? Or how about when Billie Elish wore some Nike sneakers that had the internet baffled as to their color? Those were just two of the many optical illusions that have gone viral over the years.

Today’s optical illusion will mess with your brain just as much as the two already mentioned.

Known as a Munker-White illusion, this one tricks your brain into thinking 12 spheres or orbs are different colors, when in fact, they are all actually identical.

As David Novick, professor of engineering education and leadership at the University of Texas at El Paso – and the creator of the image you see above – has explained, “A three-color confetti illusion with spheres, which appear to be yellowish, reddish, and purpleish but in fact have exactly the same light-brown base color (RGB 255,188,144).”

Speaking to Live Science, Novick says the optical illusion occurs because “our acuity for shape is better than our acuity for color, which means that we perceive the shapes with more detail and the colors with less detail.

When we look at the image “the color sort of bleeds over, or assimilates, to adjacent spaces.”

The illusion relies on the hue of the foreground stripes, not the colors in the background behind the spheres. So, if you remove the crisscrossing stripes, the illusion disappears, leaving only identical beige balls.

Your image, with all colours whose Lab color distance from (RGB) #f5c882 is in the 20th percentile or greater, replaced by #ffffff. pic.twitter.com/3iSN8P2ZEE

Very nice! This neatly matches the original with the foreground stripes removed. pic.twitter.com/ZcwflVhj6O

Live Science reports that the illusion also works very similarly when you convert all of the colors to grayscale. 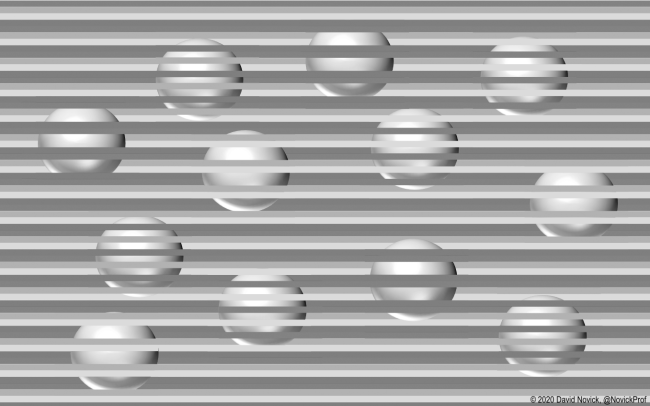 In fact, “White’s illusion,” in isolation, refers to the perceived changes in the lightness of a shape — ranging from white to black — caused by the lightness of shapes overlapping it, according to a 2010 report published in the journal Colour: Design & Creativity. For instance, when you run white stripes over a gray rectangle, the gray appears lighter, or closer to white; but when you run black stripes over the same rectangle, it appears darker, or closer to black.

As for precisely what causes these illusions in our brains, scientists are not 100 percent certain.

According to a 2010 report published in the journal Colour: Design & Creativity, it could be that the illusion sets in early during visual processing, when light first hits the retina.

Or, the effect might take hold later as the brain processes the data it sees. Or, it could be a combination of both.

Regardless of the why, much like with “The Dress” and Billie Eilish’s Nikes, it’s just fun to look at, mess around with, and discuss with your friends.

I tried shrinking and enlarging and it is very noticeable. Thanks! I find it fascinating! pic.twitter.com/JzpPtDrpGs