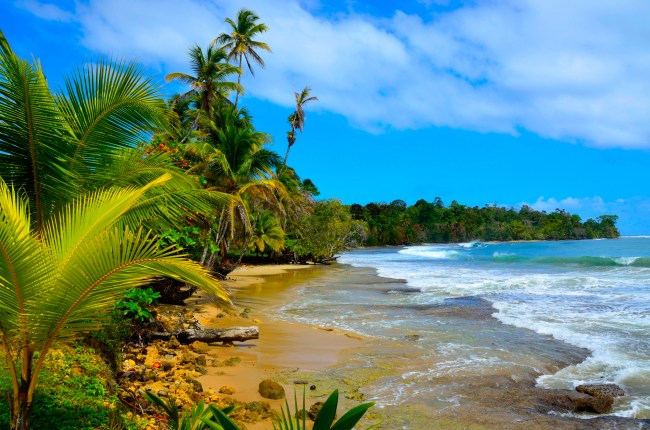 This sounds like a legitimate nightmare. These people are straight up trapped in paradise. They ventured to the Caribbean coast of Panama for a music festival just in time for the hammer to drop and the entire world to shut down because of the coronavirus pandemic and 40 of them are still trapped there!

Panama holds a special place in my heart. It’s where I studied abroad back in college. I went to Florida State and FSU has a full campus there (FSU Panama) where people can actually go and get their full 4-year FSU degree in Panama. In the two months I spent in that country I think I only stayed home two nights in total. We ventured over to Bocas del Toro a for 10 days on the Caribbean, an archipelago I’ve gone back to visit a few times because it’s so f’n perfect.

Isla Grande on the Caribbean is also my perfect picture of paradise. Like, if I were to shut my eyes and think about the paradise that’s the island that comes to mind. Not hotel(s) or the restaurant(s) but the sapphire blue water with wild Scarlett Macaws flying over as I was chilling on the porch in the rainforest. That was paradise to me.

So I get the draw of a music festival in the Caribbean of Panama. I get it. It’s pure paradise. But this sounds like my worst nightmare:

If you didn’t want to watch that clip, here’s the gist of what happened via NME:

Tribal Gathering was held between February 29 and March 15 this year on a beach site on the north coast of the Central American country, but the festival was put on lockdown for a minimum of eight days on March 15 as Panama declared a state of emergency over the coronavirus outbreak.

The strict measure meant that many festivalgoers and crew either missed or had their original flights home cancelled. While some were able to re-book flights out of Panama, further flight cancellations and shortages — as well as reported strained communication with embassies in Panama — meant that a significant number of attendees were left stranded at the Tribal Gathering site for days and weeks after the festival had ended.

Upon further inspection, the Tribal Gathering music fest was held outside of Colon. Which is a pretty vague description of the specific location, but my brief run-in with that city was a bus transfer coming from Panama City on the way to Isla Grande and I remember buying a 10-pack of Marlboro Reds off some dude who pulled them out of a plastic bag and I’m at least moderately concerned I contracted lung cancer from that experience alone. The bus depot was sketchy and that’s all I really know about Colon.

At some point, shouldn’t they (the military) be a little concerned about the festivalgoers contracting any sorts of diseases from being stuck on a damn beach? Malaria, Dengue Fever, whatever else the mosquitos might be carrying. Just bus every single person out of there and send them home already or they end up with more of these VICE documentaries on their hands.