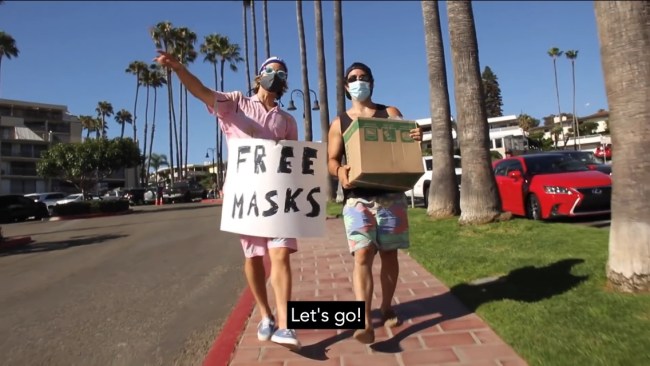 If you’re a regular reader of this website, you’re probably familiar with the JT and Chad from Chad Goes Deep. These two surfer Bros from SoCal have graced the Internet with their various quests over the years, from petitioning San Clemente city council meetings for a statue of Paul Walker to fighting for the right to party to going on Fox News to promote saving the coral, amongst other issues.

These dudes are “stoked on civic duty.” Soon they’ll have an animated show on Hulu, broadening the scope of the comedic platform they’re building.

Last week the Chad Goes Deep party Bros were on Howard Stern to talk about their efforts to fight the mask shortage in Huntington Beach. As Chad told Stern last week:

As promised, they headed back to Orange County, California to give out free masks in their hometown of San Clemente. The sequel is even more baffling than the original in Huntington Beach, including a random schmole who purposely coughs on them and a Chiropractor who seems to be an expert on coronavirus.

Dude: “It comes from 5G towers”

Chad: “Where’d you learn this?”

Dude: “I did a lot of research while tripping on acid”

People at their absolute worst, which makes for comedy at its absolute best.

“I get where people are coming from for not wanting to wear a mask. When I was in Little League, I didn’t want to wear a cup ever. Then our third baseman, Simon, got drilled where you wear a cup. And from that day forward, i was like “OK, well this is what the risk… you gotta wear a cup. So now i’m just super pro-cup.”

Now… Does anyone know of a GoFundMe where I can donate $10 to get Kellen to Ibiza next summer?