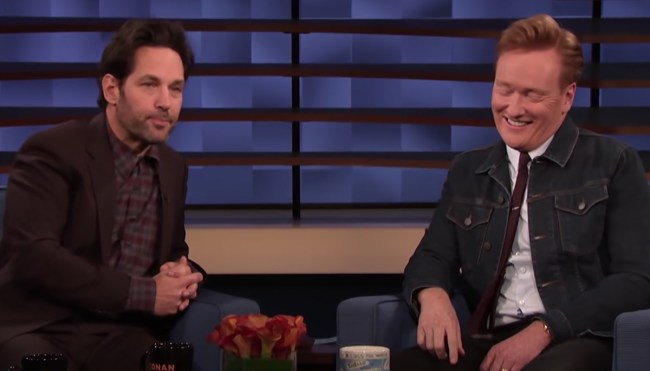 The red-haired host interviewed thousands of guests during his time behind the desk, including the man responsible for one of the show’s funniest recurring bits: Paul Rudd.

In 2004, Rudd stopped by the Late Night set ahead of the series finale of Friends and claimed he’d brought a clip from the final episode, which turned out to be a video featuring a boy in a runaway wheelchair plunging into a rock quarry before an alien popped into the frame to react with surprise.

That was not, in fact, a clip from the last episode of Friends but rather one that was taken from the largely forgotten 1988 movie Mac and Me.

That initial prank would soon become a glorious tradition, as Rudd repeatedly pulled off the bait-and-switch in subsequent appearances on Conan’s show before doing it for what was presumably the final time last summer.

Thankfully, Rudd isn’t letting O’Brien off the hook just because he’s moved on, as the actor reached back into his bag of tricks during a recent appearance on the Conan O’Brien Needs a Friend podcast.

During the conversation, Rudd said he was working on a new audio project and offered to give Conan a preview. However, it didn’t take long for his long-time victim to identify what the clip that actually from before the master prankster revealed he’d made up the aforementioned project for the sake of the joke.

Yes, I absolutely needed Paul Rudd to once again prank Conan with the Mac and Me bit but this time on a podcast with Conan just screaming the whole time "you can't do this on a podcast" pic.twitter.com/jgFYA93uP6

This truly never gets old.