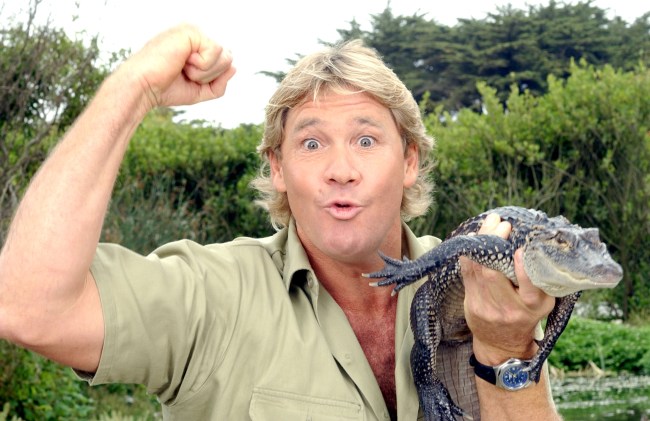 Steve Irwin would have turned 57 on Friday. The conservationist and television personality died in February 2006 after being pierced in the heart by a stingray barb while filming an underwater documentary. He was just 44.

While many took to Twitter to praise Irwin for saving the lives of countless animals in his sanctuary, or educating millions on animal rights, or his quiet philanthropy, People for the Ethical Treatment of Animals (PETA) decided to blast The Crocodile Hunter after his death. On his birthday.

To honor Steve Irwin, Google changed the logo on its search page with a Google Doodle that tells the story of his life and legacy. In response to the gesture, the oft-tone deaf PETA pulled no punches in revealing how they feel about Irwin’s life work.

#SteveIrwin was killed while harassing a ray; he dangled his baby while feeding a crocodile & wrestled wild animals who were minding their own business. Today’s #GoogleDoodle sends a dangerous, fawning message. Wild animals are entitled to be left alone in their natural habitats. https://t.co/9JfJiBhGLw

Steve Irwin’s actions were not on target with his supposed message of protecting wildlife. A real wildlife expert & someone who respects animals for the individuals they are leaves them to their own business in their natural homes.

It is harassment to drag exotic animals, including babies taken from their mothers, around from TV talk shows to conferences & force them to perform as Steve Irwin did. Animals deserve to live as they want to, not as humans demand––the #GoogleDoodle should represent that.

Mind you, this is the same dude who founded Wildlife Warriors Worldwide, an organization that aims at protecting habitat and wildlife, creates breeding and rescue programs for endangered species, and leads scientific research to aid conservation. The same dude who founded the Lyn Irwin Memorial Fund in honor of his mother, where all donations go directly to the Iron Bark Station Wildlife Rehabilitation Center, which manages 3,450 acres of wildlife sanctuary.

A bit malicious that PETA took such a hard-line stance on Irwin, given that there was so much more to him than his television stunts. Twitter was pissed.

So your response here is this Human deserved what he got and is better off dead?! You are a disgusting organizationand and should be absolutely ashamed!! He was a FATHER and a HUSBAND and did WAY more for wild life conservation than the IDIOT INTERN hired to write this tweet!

I'm an Australian wildlife rescue volunteer. #SteveIrwin and his family gave an awful lot of quiet, unpublicised support to organisations like mine. He was a serious conservationist & did the hard & unglamourous work required. PETA are attention-seeking posers by comparison

Steve Irwin and his family reclaim land for animals and run a massive wildlife rescue. His life mission was to save animals and educate people about them. I’m one of many vegetarians who rip out their hair when @peta weighs in. Shame on you. https://t.co/m4fdNymjao

I supported @peta with a fixed amount of money every month.

PETA is an embarrassment to animal rights

remember when you guys killed over 70% of the animals you rescue when they show any violent tendencies yet steve irwin literally let animals bite him and forgave them for it. don’t ever disrespect steve he did more for animals than your entire organization did or will do ever

If you thought that the animal rights organization would dial back its comments after the backlash, you’re wrong. In a statement to USA TODAY, PETA said, “People should examine Steve Irwin’s record of wildlife molestation.”