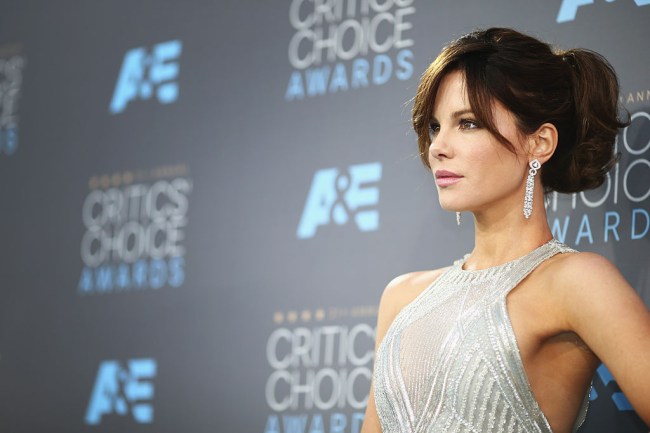 It appears that Pete Davidson has gotten over his Ariana Grande relationship ending by quickly moving onto Kate Beckinsale. Hulk Hogan once said, “say your prayers, take your vitamins and you will never go wrong.” But wouldn’t you like to know what Pete Davidson’s life advice is? Would it be, “Tell mediocre jokes on SNL, look like you’re dying, and you will never go wrong?”

Beckinsale and Davidson boastfully bragged about their blossoming romance with a makeout sesh at a Rangers hockey game because the Rangers suck and what else are you gonna do? Davidson shoving his tongue down Beckinsale’s throat quickly evolved into a meme.

Thanks to Kate Beckinsale and Pete Davidson for summing up wedding season for me in one image. #couplegoals pic.twitter.com/alU0uZMHOZ

Pete Davidson and Kate Beckinsale are swapping spit again (that was painful to write out). The 2019 Beckinsale/Davidson Makeout Tour continued on Monday night. This time it wasn’t a hockey game as the romantic backdrop for their necking session, this was even more charming. Davidson and Beckinsale made out after watching a Netflix program. No, it was not Abducted in Plain Sight.

RELATED: Pete Davidson Got A Large Unicorn Tattoo And It Is Really Something

Beckinsale and Pete went to the premiere of The Dirt, a biopic about Mötley Crüe that stars Davidson as music executive Tom Zutaut and his friend Machine Gun Kelly as Tommy Lee. The glam band movie got the couple in the mood because they were passionately kissing in an SUV right outside the iconic Whiskey A Go Go nightclub, where an afterparty for The Dirt premiere. Not quite Tommy Lee and Pam Anderson territory, but it’s a start.

Kate Beckinsale snogs Pete Davidson in the backseat of their car after she supported him at Netflix’s The Dirt premiere https://t.co/OvvC8JPcGH pic.twitter.com/qb6vRPCTmW

Based on the photo, it appears that Davidson got to first base. No confirmation on whether he tried to stretch it to a double with some heavy petting or even some dry-humping. Who knows, if this puppy love keeps going, the celebrity couple could be playing Seven Minutes In Heaven any day now. “Netflix and chill” is probably way more effective when you actually star in the Netflix movie you’re watching.

Looking at these photos of the alluring Kate Beckinsale is enough to make you question your faith in a higher divine power that is just and benevolent to all.

It should be noted that Kate Beckinsale has a brand new TV show called The Widow airing on Amazon. The new series debuted on March 1, 2019, a few weeks before she started appearing with Davidson in public.

Pete addressed the 20-year age difference between him and Kate on a recent episode of Saturday Night Live. “Apparently people have a crazy fascination with our age difference, but it doesn’t really bother us. But then again, I’m new to this. So if you have questions about a relationship with a big age difference, just ask Leonardo DiCaprio, Jason Statham, Michael Douglas, Richard Gere…”