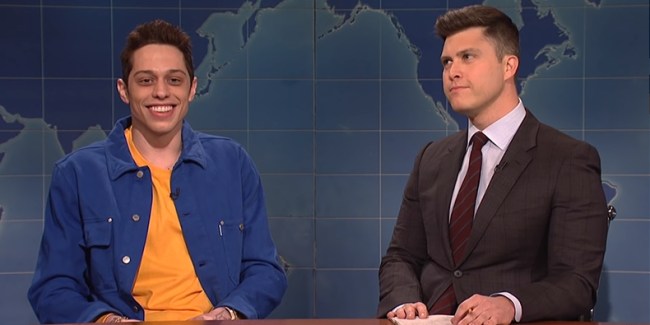 Pete Davidson was booed by the Saturday Night Live crowd, which is usually a very supportive chucklefest. The audible disapproval came after Davidson made the comment that compared fans of R. Kelly to supporters of the Catholic Church.

“Before I continue, this guy is a monster and he should go to jail forever,” Davidson said of R. Kelly on SNL‘s Weekend Update with Colin Jost. “But if you support the Catholic Church, isn’t that like the same thing as being an R. Kelly fan?” The comparison received a chorus of boos by the audience.

“I don’t really see the difference,” Davidson added. “Only one’s music is significantly better.” Davidson continued to make the comparison. “Just the other day my mom was like, ‘I’m going to mass.’ And I was like, ‘OK, I’m going to go listen to the Ignition remix,” Pete joked.

“And to people who ask, ‘How can you listen to that music after what he did?'” Davidson answered, “I don’t know, headphones?” “Look, I’m not saying it’s an easy decision,” Davidson said. “I’m just saying you don’t know how good someone’s music really is until you find out they’re a pedophile. You know? The reason everybody is so upset is R. Kelly and Michael Jackson made great music, you know. But if I found out Macklemore did some weird stuff, I’d be happy to free up some space on my iPhone.”

Davidson admitted that he would not be principled enough to boycott something he truly loved, even if the creator did evil things. “I don’t ever need to see a Kevin Spacey movie again but if the CEO of Swisher Sweets turns out to be a cannibal, I can’t just change my whole life.” Davidson suggested that everyone should donate to charities if they listen to an artist who has been implicated in criminal activities.

“The rule should be, if you want to listen to their music, you just have to admit that they’re bad people. All I’m saying is pretending these people never existed is maybe not the solution. So here’s my plan and hopefully you guys like it. Every time any of us listen to a song or watch a movie made by an accused sexual predator, you have to give a dollar to charity that helps sexual assault survivors. I’ve already donated $142. That’s just from the Ignition remix alone.”

“Believe me, look, once we start doing our research, we’re not going to have much left, you know?” Davidson added. “Because it seems like all really talented people are sick.” Then he turned to Jost and said, “Don’t worry, Colin, you and me are good. But not Michael Che. Che’s a genius.”

RELATED: Pete Davidson Got A Large Unicorn Tattoo And It Is Really Something

Davidson, 25, also commented on his new relationship with actress Kate Beckinsale, 45. Davidson said there has been much talk about the 20-year age difference between him and his new girlfriend. He addressed it on Weekend Update.

Idris Elba hosted this week’s Saturday Night Live and appeared in the quality sketch called “The Impossible Hulk.” Elba is Dr. Bruce Banner, who was exposed to gamma radiation during a failed experiment. Now, whenever he gets angry he turns into an emboldened white lady who is quick to call 911.

There was also a comedy skit that with a parody commercial for a chicken joint called Bok Bok. The fast food restaurant has a mascot that eerily looks exactly like the horrifying half-human, half-chicken meme known as Momo.